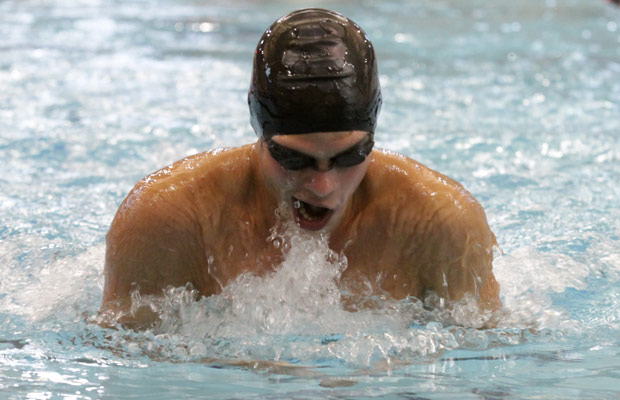 With only a few members, the Boys’ Swim team will be struggling to earn points for the season, according to Coach Chip Crow. However, Crow still feels that the small team consists of strong athletes.

“We have a very small team this year, but everyone has experience, so we don’t have to start out with easy practices,” senior Sean Pirrone, a mid-  distance swimmer, said.

According to Crow, swimmers like Pirrone and sophomore Peter Lucido, who Pirrone sees as a key diver, are some of the swimmers who are essential to the team because of their combined experience. Even though the team has many athletic members, because of their small size, it will be tougher to win meets.

“We’re getting there, but we don’t have the numbers to beat a lot of teams,” Crow said. (brief by Bennett Smallwood)

Off to a Slow Start

The FHN Girls’ Golf season has had a belated start, due to weather.

Because of the stormy weather at the beginning of the season, the FHN Girls’ Golf team has not been able to compete in all of their matches so far.  But the rainy days haven’t stopped the team in the slightest; they still continue to practice at the Country Club after school, with the goal in mind of a winning season and strong team.

“Overall [the goal is for] everyone to have fun, and improve scores by the end of the season,” Head Coach Holly Brocksmith said. (brief by Breanna Relleke)

Varsity Boys’ Soccer welcomes more  team members this year. Last year, they had eight seniors that  graduated, so this year’s focus will be getting to know the new teammates.

“I think anytime you bring a different group of players together, you’re going to be excited about how they work together and play together,” Head Coach Larry Scheller  said.

Because it is  so early in the season, the team practices every day to prepare for future games. As of press time, the teams’ record is 1-1.

“What I expect most from my players is that they are always working hard,”  Scheller said.

With the new players on the team, Scheller feels that with  plenty of hard work, there will be many wins for the team.

“I think they have the potential to do well, as long as they work  hard,” Scheller said. ‘There is enough talent on the team to do well this season.”

Their next game is at home against Fort Zumwalt North tomorrow at 6 pm. (brief by Mia Elliott)

Despite the rainy start, the FHN softball team is looking forward to a great season.

As of press time, the FHN Girls’ Softball team has only played three of the four games they were scheduled for, due to rainy weather. Their current record is 3-3, and the coaching staff and the team remain optimistic.

“We like our team,” Head Coach Bob Dunahue said. “The girls have been practicing rigorously. They believe, as the coaching staff does, that we will be quite successful.” (brief by Breanna Relleke)

So far the FHN Cross country team has had to face many obstacles. This includes the addition of many young runners, loss of girl runners, and a major rise in temperature.

“Everyone does a good job at running,” Varsity Runner junior Chase Powelson said. “Everyone’s out there putting in the same amount of work.”

“I wish we had some more females out because the more numbers, the better [the season] as we go,” Head Cross Country Coach Kim Krieger said.

Regardless of the amount of girls, Krieger feels confident in the team’s abilities. Members of the team feel that they will still work well with each other and are looking forward to racing together in the season.

Cross Country  has faced extreme heat at the beginning of their season. The team avoided running during the hottest time of the day by practicing in the mornings instead.

“We haven’t been able to run as much as we could’ve,” Powelson said. “You can’t run that much when it’s hot out.” (brief by Bennett Smallwood)

Swing for Something New

“What I like most about being the assistant coach is being a part of a tennis program that Coach Kate has worked so hard to build,” Knight said.

“I’m most excited to watch the progression of the girls, whether they’re learning the sport for the first time or are experienced,” Knight said. (brief by Mia Elliott)