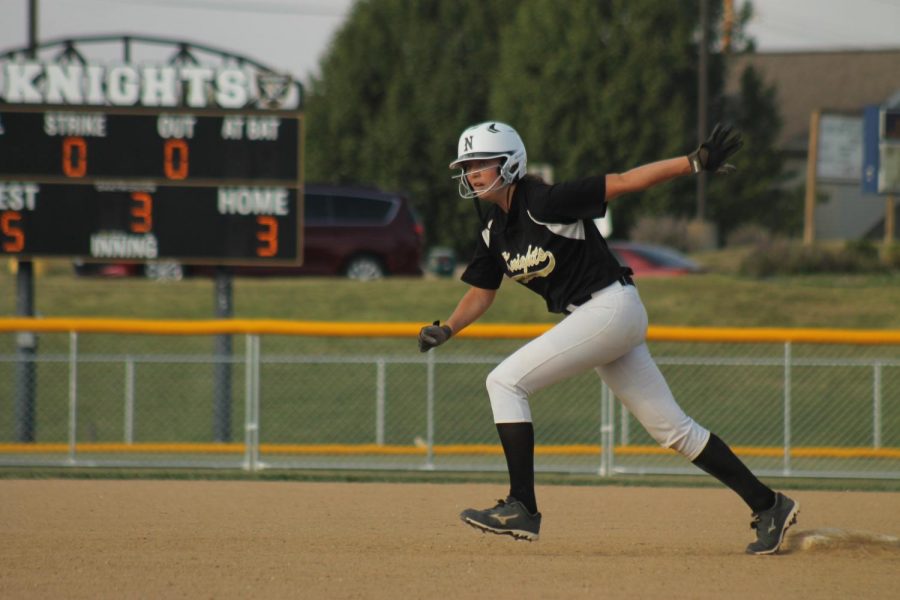 Senior Janae Watkins prepares to take a lead off of 2nd base vs. FZW on 9/26.

In their third straight appearance in the state quarterfinals, the Knights looked to take the next step and get past their rivals Francis Howell and advance to the semifinals. With it being both a rivalry game and having a spot in the semi’s on the line, the Knights had an extra incentive to take down their rivals.

“We definitely wanted it more, we wanted to put them in their place like we did a couple of years ago,” assistant coach Mike Freedline said.

The Vikings had other plans.

In the top half of the first, Howell was able to jump off to a 1-0 lead behind a double by Whitney Boschert and then an RBI single by Sophia Davis. It was just the start of what turned out to be a special day for Boschert, who doubled the Vikings lead with a solo home run in the 3rd and went deep yet again an inning later to put Francis Howell up 5-0 over Howell North after four innings. This forced a change to the Knights’ approach in the game.

“In the beginning, it [FHN’s approach] was pretty strong,” Brianna Azevedo said, “but after the first couple of innings, our energy level went down so our heads also went down.”

Not helping Howell North’s cause was the lights-out performance on the mound by Boschert. Not only did she play a large role in the Vikings scoring eight runs in the first five innings(4-4 with 2 HR and 4 RBI), she was also able to dominate the Knights’ lineup and delivered five shutout innings.

“She [Boschert] knew how to change her speeds and kept them [Knights] off balanced,” Freedline said. “We just couldn’t make solid contact against her.”

After giving up another run in the top of the sixth to make the score 9-0 Howell, the Knights were finally able to get on the board with an RBI single by Elizabeth Davis, followed by an RBI by Jade Hake. However, it was too little, too late for FHN. The Vikings were able to extend their lead by three in the 7th inning and held the Knights off of the scoreboard in the bottom part of the inning, and won by a score of 12-2. It was Howell’s third win vs. Howell North this season.

While it was a disappointing end to the Knights’ season, the team was still able to enjoy a special season that saw FHN make yet another state quarterfinals. With this, the players were able to remain positive even after the loss.

“I was just happy that we got to this point again,” senior Skylar Ruiz said. “It sucks that we couldn’t win state, but we played good to end the season.”