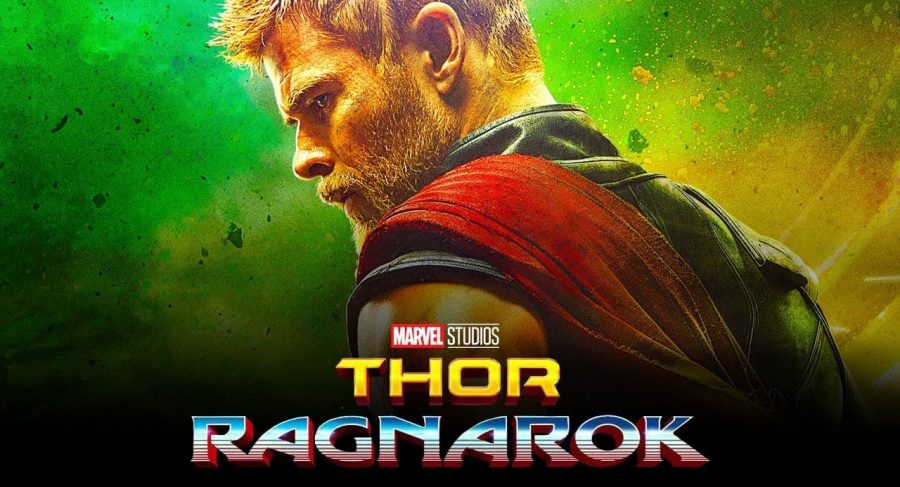 It’s the god of thunder against the gamma powered beast; facing off, unwillingly, in the contest of champions. An audience fills the arena with bright technicolor lights flashing from every angle of the event. Thor, the god of thunder, must battle to escape the treacherous planet, as well as search for his father, stop the goddess of death, defeat a fire demon, make peace with his brother and save his home from Ragnarok, the end of all things.

This is the overall plot for the newest addition to the Marvel Cinematic Universe (MCU). “Thor: Ragnarok” revisits, revamps and revises the character of Thor in his newest adventure across space. Along the way he reunites with old friends and frenemies, as well as making some new ones.

There is a lot going on in this film. From the visuals to the story, the entire movie is jammed packed with too much plot and an awkward tone, but at the same time it’s oddly entertaining.

Past Thor movies were all inspired by typical fantasy, “Game of Thrones” type of stories. They were much more serious and much more grounded. Characters would die, characters would be betrayed and characters were a lot more damaged. This is what actually made me like the Thor movies; however, Ragnarok changes the tone in a good but under-executed way.

The tone is much more Guardians of the Galaxy-ish. It takes a much more lighthearted, colorful and fun change of pace. It works… to an extent. The comedy of the film was very well done. All of the jokes were well written and delivered; plus the humor wasn’t distracting at all. The music was also tastefully done. It wasn’t an amazing score, but it was very creative. It used more techno/alternative rock music which was completely different from any other Marvel film out there (there is also a song from the movie “Willy Wonka And The Chocolate Factory” that raises the nostalgia levels higher than they already are.) There is such a fun factor to the tone, that you just can’t help but be entertained.

However, this tone clashes with the story. The story is much more depressing and serious than it seems from the trailers, and the tone doesn’t match up with it. For example, the movie has a number of very sad, somber scenes, but script ruins the moment by throwing in a joke. Sure, the joke was very funny, but it ruined the scene’s purpose.

The script is also very compacted. It didn’t really feel like the movie was telling a story, but it was more of checking off a to-do list. This film had so much to get through that it didn’t have time to explore the different plot points that it had. Also, a lot of the characters were very underwritten. The Grandmaster, the Hulk and Valkyrie are just some of the characters that didn’t have much to add to the overarching story; even though the overarcing story isn’t very clear.

Yeah, the story is hard to follow. However, the performances from every actor/actress in this movie was stellar. Specifically, Cate Blanchett and Chris Hemsworth.

Hemsworth is a comedian. He is much better as comedy than he is at drama and action movies, so I can see why Marvel would realize that and want to utilize that. Even some of the best moments from past Thor movies were him being comedic, so it was nice to finally see him do what he does best. I’ve been a big fan of the character Thor ever since he first debuted, and I honestly like him even more now seeing this movie.

The other MVP of this film, Cate Blanchett, starred as the goddess of death, Hela. It was finally time for the MCU to debut a female villain, and they knocked it out of the park. Hela was one of the best written villains in the MCU, but wasn’t the most complex; however, Blanchett’s performance was amazing. To see such raw power come from not only the character, but the actress, gave the film such a flare that it so desperately needed.

This film, like the rest of the Marvel films, has its flaws. The flaws seem to be the very same repetitive in the MCU, but the film is such a fun experience. So, even if someone hates Marvel movies, you will definitely enjoy “Thor: Ragnarok.”