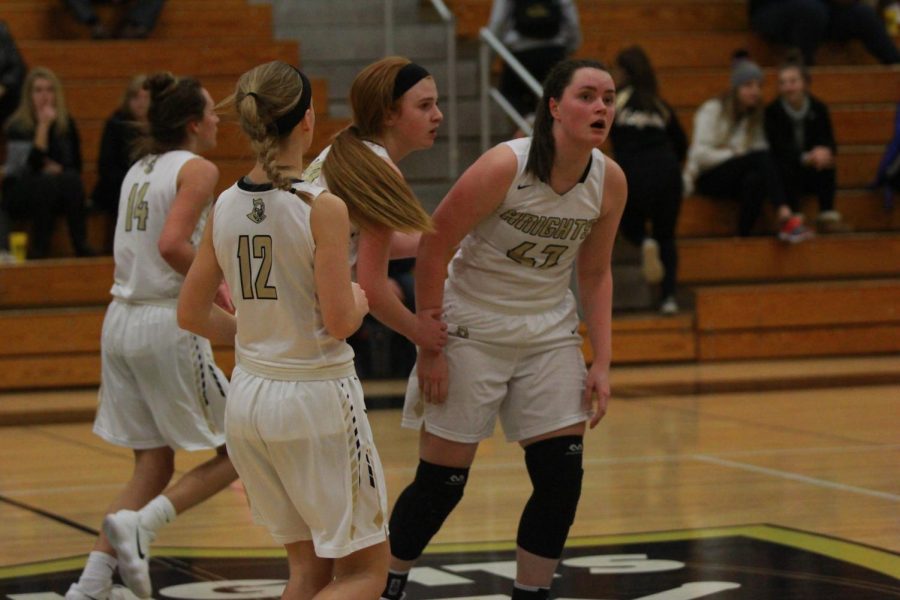 The Lady Knights varsity basketball team huddles up at half court during their home game vs. Timberland on 1/16.

On Wednesday, February 7, the Lady Knights varsity basketball team took on the Ladue Rams at home. At the two minute mark, Kalifia Muhammad was off to a hot start as she was able to get five points on the board for the Rams. Freshman Isabelle Delarue put the Knights on the board a few moments later with a three-pointer making it a two-point game, but this gap continued to grow and the Knights would continue to trail through the rest of the game.

“Focusing on your end goal, and your common goal throughout the whole game,” junior Corinne Stevens said on keeping a positive attitude even in difficult games. “Not focusing on what is going wrong with all the little things, but looking at what you are trying to achieve.”

One of the main factors in the game was the number of fouls made by the Knights giving the Rams multiple easy opportunities to rack up points. In the third quarter alone there were over eight fouls called against the Knights resulting in free trips to the line for Ladue. Out of these 16 free throws, the Rams were able to score nine out of their sixteen points in the third quarter.

“I think the biggest struggle we had in tonight’s game was effort and attitude,” junior Gabby Delarue said.  “We were all in a funk, including me, and we need to work together as a team to build each other up and get out of that.”

The Rams had an unmatched high accuracy on the net and energy on the court, which helped push them above the Knights. Rams senior Kalifia Muhammad was a key component in the game as she racked up points for the Rams and was mostly unstoppable by the Knights defense. The Lady Knights fell 52-22 to the Rams.

“I hope to improve upon our effort because we did not show a lot of effort tonight, that’s what I was most disappointed with tonight,” coach Dawn Hahn said. “We also need to work on communication on the floor and a presence that we need to impose our will on another team.”

The Knights will play against Howell in their annual Pink out game Friday, February 9, which will be a conference game and the perfect opportunity for the Knights to redeem themselves from this loss.