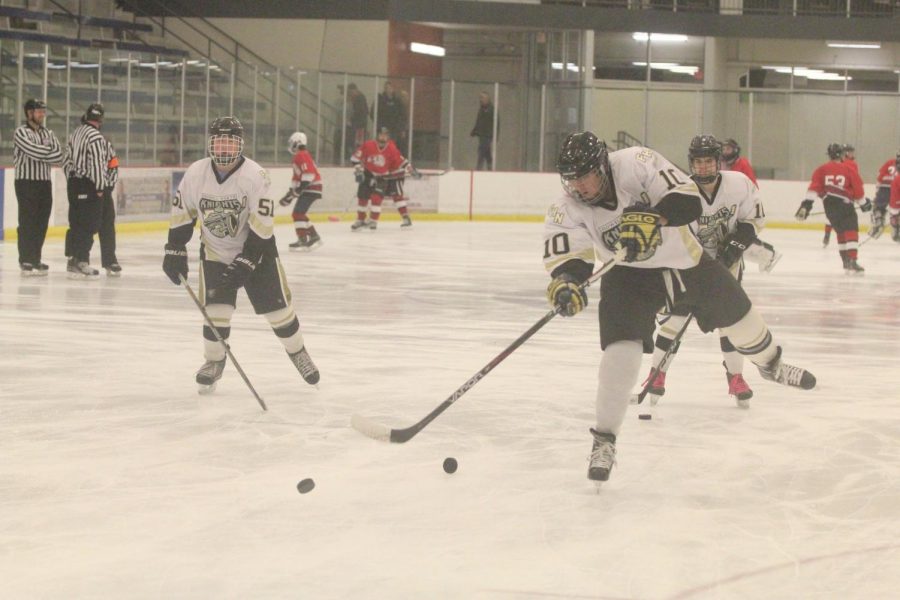 Senior Kurt Springli (#10) takes a shot on goal with fellow senior Jacob Casey watching in the background in warmups ahead of FHN's varsity hockey game vs. FZS on 11/10.

The Francis Howell North varsity hockey team finished the season with a record of 1-19 in head coach Ryan Gannon’s first season in the position. One of the biggest reasons behind the struggles of the Knights was due to something out of their control: injuries.

“From the start we were okay, we just got hit with lots and lots of injuries, I think that’s what killed us the most this season,” goalie Charlie Jones said.

It was a bit of a rough season for the team, but it wasn’t all negative. Throughout the year, the team was able to grow in multiple areas. Two of which were in confidence and in team communication.

“I believe this team was almost forced to grow closer due to the restraints of what players we had available and believe a lot of lifelong positive memories were made even though we didn’t have the year we originally hoped for,” first year head coach Gannon said.

While the Knights went through a lot of bad things this season, coach Gannon and his team didn’t let these things take them down and are already looking forward to the season next year and how the team can improve.

“We joke around the locker room about whether kids are drinking enough milk, but we are going to focus on more off-season training in years to come to help our players stay in performance shape,” Gannon said.

Over the course of the season the Knights had to fight with the fact that they played with only nine guys on the rink compared to other teams that played with 18-20 players on the bench. Coach Gannon describes it as a mental challenge for the team, but they found their way through that and were able to remain competitive for much of the season. Going into the 2018-19 season, coach Gannon hopes to not just have most of his current players return, but to also have some newcomers join the team.

“We have some strong freshman that will be coming into the program next year that we are all excited about. We will definitely miss our seniors but I am happy for what they gave in their time to us and the club and am excited for them to continue in their paths with the future,” Gannon said.