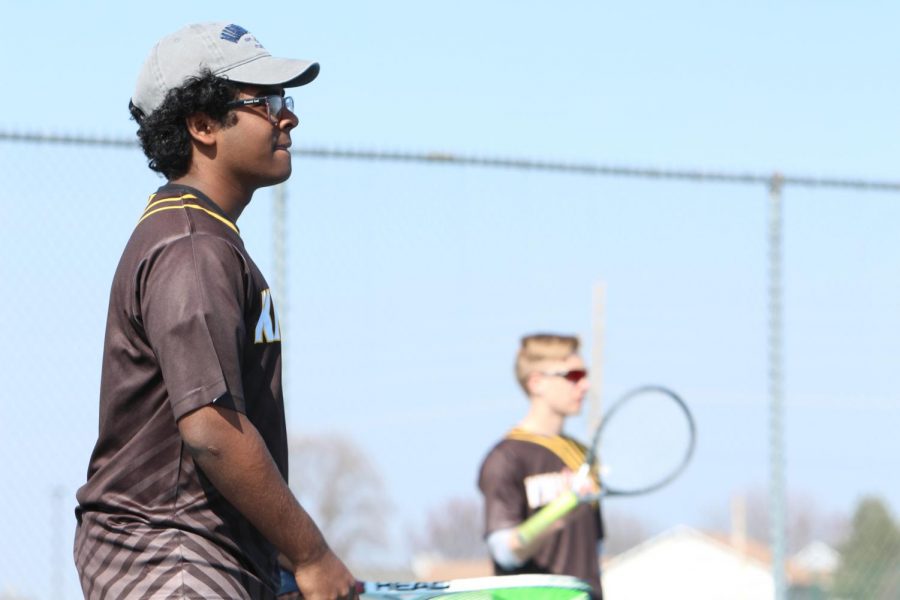 Ronald Joel prepares for a serve along side partner Tyler Winner in a 4/10 match against Parkway South.

On April 10, the FHN Knights tennis team lost their match against the Parkway South Patriots. The team only had two wins over the entire match, the first coming from Dev Patel and Brendan Schmidt in a doubles match and later Joe West who won his single by final scores of 6-4 and 6-2. The rest of the match was dominated by Parkway South.

“Our three doubles won today, and continue to be undefeated,” head coach Beth Jameson said. “They are two seniors who’ve come back from being partners last season, and it just gives us a little excitement, something to rally around.”

Dev Patel and Brendan Schmidt, so far undefeated, have had an even better season than they had last year. In their doubles match against the Patriots, they won by a score of 8-3 and put together one of the strongest performances on the court all day.

Over the season itself, the team has grown a lot in confidence and have gathered a good team spirit. Every newcomer on varsity got into the team without any problems and the older teammates appreciate the performances and effort they all put into the sport.

“The boys hit some bigger hitters at practice and I tried to give them some plays and looks they haven’t seen before, so I had them hitting against some different opponents,” Jameson said.

The team has to go through the rest of the season with less practice and more matches. Most of the team will be forced to use the matches as practice to prepare for other matches since the weather in the beginning of the season made it impossible for the team to have matches or practice. Howell North’s next match will be on April 17 against St. Charles West.