A Priceless Review: “Isle Of Dogs” 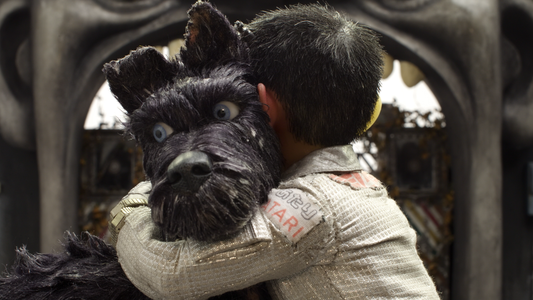 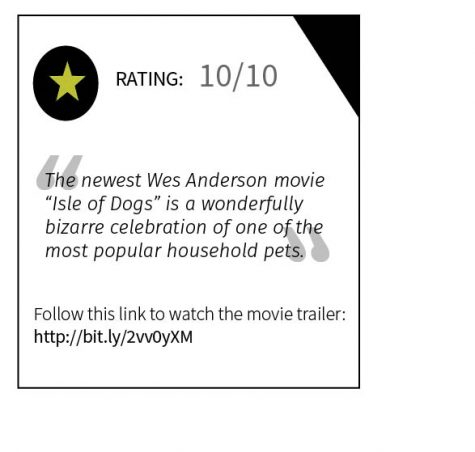 If one were to say “Isle of Dogs” three times as fast as they can, they would end up saying “I love dogs”. Fitting as it sounds, the newest Wes Anderson movie “Isle of Dogs” is a wonderfully bizarre celebration of one of the most popular household pets.

Directed by Wes Anderson, “Isle Of Dogs” is a stop-motion animated movie that takes place in a distant future city in Japan. The population of dogs in the city has reached epidemic proportions, so the mayor decides to ban all dogs and send them off to a trash island known as the Isle of dogs. When a young boy arrives at the island looking for his lost dog, a group of alpha dogs makes it their mission to find his pet, and end the isle of dogs one and for all.

I have been a huge Andersonite ever since I watched his prized gem “The Grand Budapest Hotel”. I love his visual styling, storytelling and humor, and this film is no different. “Isle Of Dogs” carries such a unique charm while telling the most intensely detailed of stories to have been told in the world of stop-motion.

What makes a Wes Anderson movie a Wes Anderson movie is the cinematography. There are a lot of tracking shots, quick edits, quick pans and vertically symmetrical stills. His trademarks are the most delightful, imaginative things to have originated in cinema, and it doesn’t disappoint with this movie.

Another trademark that is pivotal in his films is the humor. Like his other films, this one entails a lot of dry humor. Depending on who views this movie, it may or may not be funny. I have a very broad sense of humor, so I can appreciate the comedy style Anderson chooses to use. However, senses humor are different for everyone, so it takes some time to get used to a different comedic atmosphere.

The one other stop-motion movie Anderson has made is “Fantastic Mr. Fox”. These two are very similar when comes to storytelling and characters. However, this recent addition to his resume is far more superior. The best way to describe “Isle Of Dogs” is like a storybook. There are different chapters that help the audience keep up, and the story has a fairytale sense of curiosity that makes the viewer want to turn the page.

The pack of alpha dogs is another story. Each had their little quirks and idiosyncrasies that enhanced the movie. I cared about them. The film’s purpose is to make the audience not just fall in love with dogs, but specifically with these dogs. The main dog, Chief, has a very grounded character arc that is extremely clever and surprisingly mature. It created a strange yet emotional connection with Chief. It wouldn’t be too surprising if tear went down someone’s face.

A very important thing to keep in mind before watching “Isle Of Dogs” is that this no ordinary animated film compared to others like Pixar or Dreamworks. It’s not for kids. Not saying that it’s super inappropriate, but I was a little surprised when the movie displayed some mature, dark, adult content. I doubt kids would pay attention enough to notice due to the film being more serious than funny, but if your kids or family is into animated films like “Madagascar”, “Despicable Me” or “The Lego Movie, this film wouldn’t be your cup of tea.

As for me, this was more than a big cup of tea; this was a giant mug of hot chocolate with beautiful candy decorations all around a big mountain of sweet whipped cream. This movie creates some mean competition for the Oscar category of Best Animated Feature, and it would incredible if this were to win over another Disney/Pixar film. “Isle of Dogs”, so far, is the most professional, stimulating, productive film of 2018.