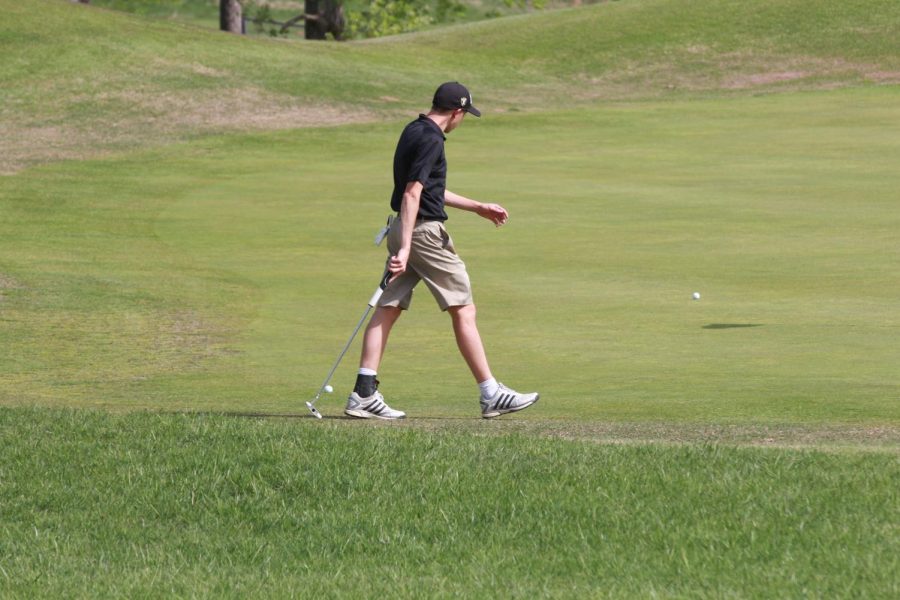 Senior Thomas Bell walks on the green vs Francis Howell.

The varsity golf team’s star player, Thomas Bell, is the only individual who has a chance to compete in sectionals. Bell has played golf ever since he was young, along with his dad and his brother. With the long-term experience, he is prepared to overcome whatever comes in his way.

“My dad and my brother played golf when I was younger and they had me play it and ever since I’ve really enjoyed everything about it,” Bell said.

Bell competed in last year’s sectionals and wasn’t satisfied with the results he had. This year, he is different and is now ready to meet his expectations.

“It feels good to make it to sectionals, but last year I felt like I didn’t play my best,” Bell said. “But this year, I feel like I’m a lot different and ready for this year’s sectionals.”

After the season, Bell plans to continue playing golf and compete at state. He wishes to see the improvements and where it takes him in college.

“I hope to go to state and at least do well in tournaments there and plan to play more in college,” Bell said.

Bell wishes, after his departure from the team and school, that younger students who want or are interested in playing golf to join the team. For a small numbers of players, it is easier to get along and easier to improve with them.

“Come and play golf. It is a lot of fun and the team has more of a family feeling because there is like 8 or 10 students playing,” Bell said. “You really get to know each other a lot better than other sports because we just have a lot less people.”