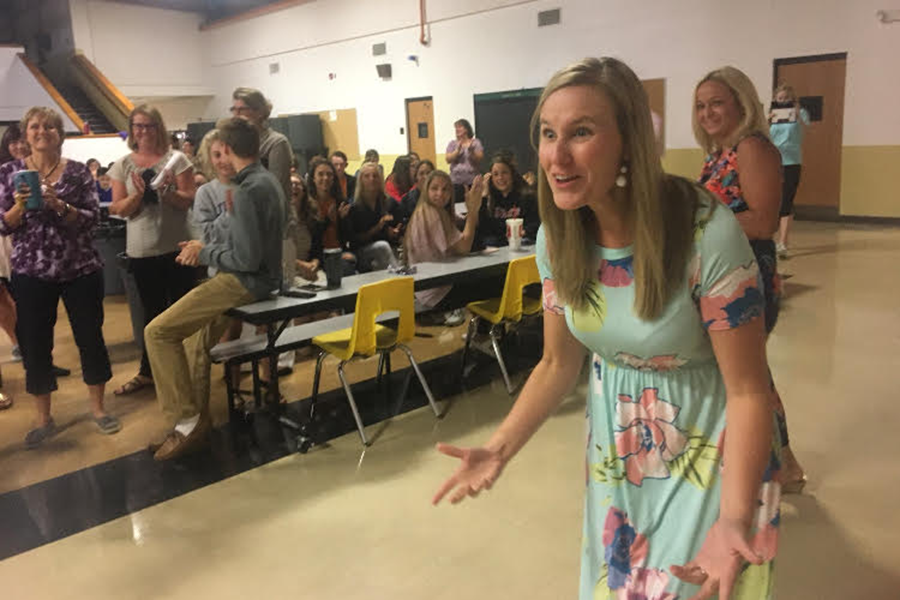 In a surprise announcement on August 15, English teacher Shelly Parks was announced as a finalist for Missouri Teacher of the Year.

“A true inspiration” is what many have called English teacher Shelly Parks. This compliment being proved time and time again as Parks teaching accolades begin to grow.

Parks makes it a point to help her students, between just being compassionate and enthusiastic about her work. In addition to teaching Parks is also a StuCo sponsor, connecting her to more kids than just the ones in her class hours, helping her to build trusting and caring relationships with a large percentage of the school.

On August 15, in a surprise announcement in the commons during first hour, Parks was announced as a Missouri Teacher of the Year finalist. To put it in perspective, only 32 out of all teachers in Missouri have the honor of receiving the Regional award, and there are only six teachers in all of Missouri that get the honor of being a state award finalist.

“I had no idea that this was going to happen or be a thing,” Parks said. “I’m so proud to be a teacher at this school.”

As a state finalist, Parks will now move into the interview portion of the 2019 Missouri State Teacher award. If awarded this honor, she will receive a: cash prize, class technology set, be able to attend the international space camp, an all included trip to meet the other winners for the state teacher award, and an trip to the White House Rose Garden for a recognition ceremony, among other activities.