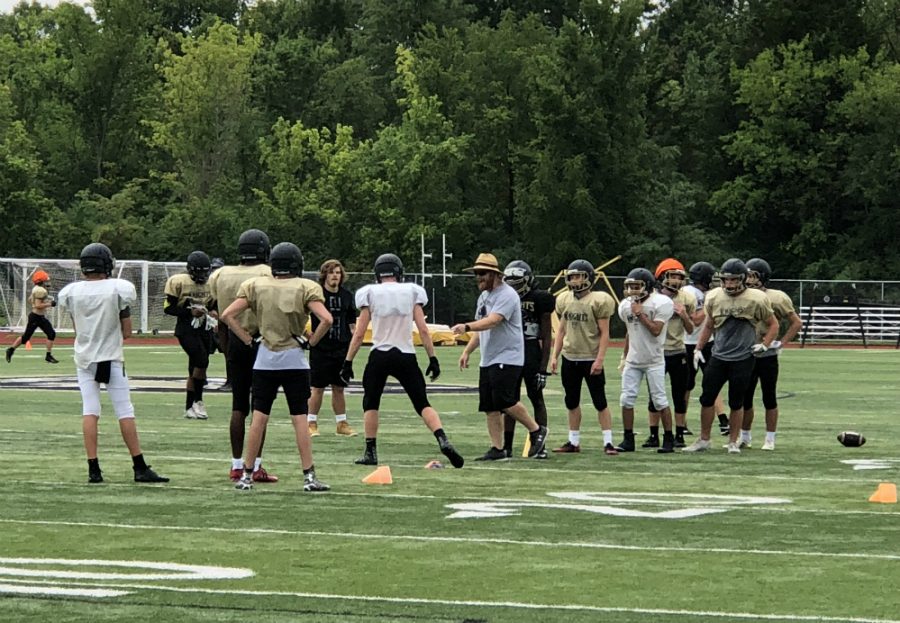 Football Head Coach Brett Bevill, instructs his athletes in a practice on August 15.

As fall sports start to kick off the action for the 2018-2019 school season, one of the most anticipated events that students are looking forward to is Black and Gold Day. This weekend is especially important to the football team, where the c-team will get their chance to show the school what they’ve been training for, for the first time. Meanwhile, the varsity team will be participating in the Jamboree held at Parkway North High School.

“The Jamboree is used for the varsity players to show off the hard work that most players have been putting in since February and show how far we’ve been able to come as a team,” Head Coach Brett Bevill said. “Black and Gold Day is used to showcase the new guys in the program and what they’ve been working towards the past couple of weeks.”

The Jamboree will be held on Friday, August 17, the day before Black and Gold Day. At the Jamboree, the teams will then get split in two, an offensive team and a defensive team. From there, the teams will face off against the two teams from De Smet, Parkway North and Lafayette (Wildwood) at least once in games, only a few minutes long. That next day, at Black and Gold Day, the c-team will split into the same two teams and play one full quarter in front of the fans.

“People should come out to Black and Gold day as well as the Jamboree, because it really helps promote school spirit, which is something that is asked of the FHN students,” senior Joshua Simmons said. “Both days really help the school feel connected and really help promote pride for our school.”

The football team has gone over a huge makeover from last year, calling multiple players from junior varsity and the c-team up to fill in some huge roles. But even with that, the team has been able to keep a positive attitude within the program and has been described as a “tightly-knit group” that’s focused on being a team, and not an individual.

“I believe that if people decide to come out and support the team, they should look out for every single player, because all of them come out and work hard everyday,” Bevill said.