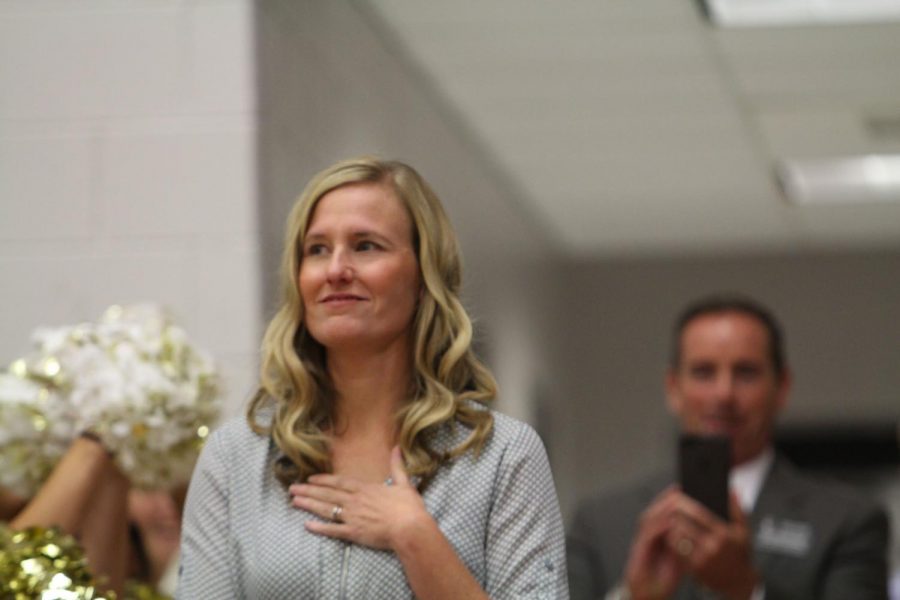 On Aug. 28, English teacher Shelly Parks was announced as the Missouri State Teacher of the Year. Now, after receiving this award, Parks has toured around Missouri, giving speeches and serving on different committees.

The gym is abuzz with expectant murmuring. Hundreds of eyes are watching, waiting for the lady of the hour. Suddenly, the gym is filled with yells and cheers as English teacher Shelly Parks steps through the doors. The Missouri State Teacher of the Year has arrived.

“I cannot even possibly put into words what it was like walking into that gym,” Parks said. “I still feel like that isn’t real. I would not believe that really happened except for there’s video proof. It just seems so surreal.”

Throughout this process, Parks was supported by her school community. According to Parks, she has received lots of encouragement from her colleagues. She is especially thankful for the support she’s received from the English department and Associate Principal Katie Greer. Lindsey Scheller, English teacher and long-time best friend of Parks, can’t think of anyone better for the award.

“She will never, ever, ever cut a corner in teaching at all,” Scheller said. “Like, I feel it is so tempting, when you’ve been teaching for as long as she and I have, to just be like ‘Here’s how we did it last year. Last year was good enough.’ She never does that. She never shies from anything. She’s all about what’s best for kids.”

“[The interview] was just intimidating,” Parks said. “It was a teaching interview, but I didn’t talk a lot about teaching. I talked a lot about education advocacy, policy and legislation. Not really my classroom and my kids, which is what I’m used to. So, it definitely threw me for a loop with the questions they asked.”

As Teacher of the Year, Parks has more responsibilities and duties. She’ll go on multiple speaking engagements around the state, talking to different teachers and classes about her values and ideals. She will also take part in education committees and even travel to the White House and meet with Betsy DeVos and President Trump with the other Teacher of the Year winners throughout the country. Other fun and unexpected events include throwing the first pitch at a Cardinals baseball game and standing out on the field at a Kansas City Chiefs football game with the Kansas Teacher of the Year. With these new duties, Parks is expecting to be out of the class for 50 to 70 days. With this absence in mind, the district agreeed to hire a permanent substitute for 2019. Parks will still be around the school for students.

“I feel like there’s definitely irony in the fact that you won a teaching award but now you’re not going to be teaching,” Parks said. “I think that I’m just going to have to consistently remind myself that while I am not with my kids everyday, I am sharing their stories when I’m not with them. I’m going to be highlighting public education through this school, which I think is pretty cool. I know that people all across the state are going to hear about this school and I am trying to really help not only kids in my classroom but kids all across the state.”