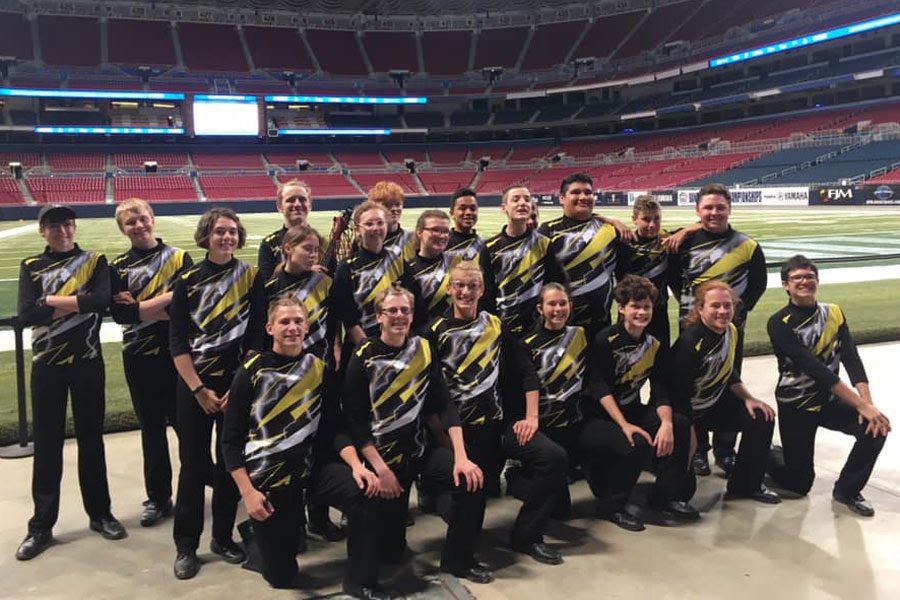 The Knightpride Marching Band performed at the America Center on Oct. 26. They placed forty-second out of 72 bands and received a ranking of "excellent."

The rattling of drums. The blare of trumpets. Hundreds of people, walking in sync. These are the things that filled the dome of the America Center in St. Louis on Oct. 26 and 27. A total of 74 marching bands from across the region came to participate in the Bands of America Super Regional, thousands of marching band students gathered in one place, showing off their skills, striving to win the prize and advance to the next level of competitions.

Among these multiple bands, Rob Stegeman, Sam Weaver and several other students, 108 in total, threw in their hats for a chance to advance. For the first time in ten years, the FHN Marching Band had the honor of competing in this prestigious competition. Overall, the marching band did fairly well. The marching band received an overall ranking of two out of three, which is an ‘excellent’ on the three point scale. That is no small feat for a national competition.

“Think of it like a ‘B,’” Band Director Rob Stegeman said. “When you’re talking about scores at a national competition instead of a local one, it’s an entirely different thing, this is pretty good.”

Out of the 72 participating bands, FHN placed forty-second, receiving the honor of the highest placing band in the entire Francis Howell School District, and the 108 students from FHN who participated are pleased at this outcome.

“It was a lot of hours, and we had to give it our all,” Head Drum Major Sam Weaver said. “We did the best we could. That was our best shot, we really gave it our all.”

Not only did the band have to create its own routine and learn the proper marches and notes, the band also had to create its own set. The theme that the marching band went with for this year was “Electrical,” and with the help of students and adults alike, they created a masterful set, complete with welded parts.

“There’s so much that goes into it now,” Stegeman said. “It’s not just marching and playing. There’s dance choreography, there’s props, there’s set design, there’s all sorts of stuff. Marching band is musical and visual, and the marriage of those two things, and they have to work together.”

The amount of practice and discipline that went into this show was large. Band members started rehearsals at the end of the summer, practicing about three hours every day of the week, spending large chunks of their time after school to participate and practice.

“We started in July, and the show was in October,” Weaver said. “It was a ton of hours.”