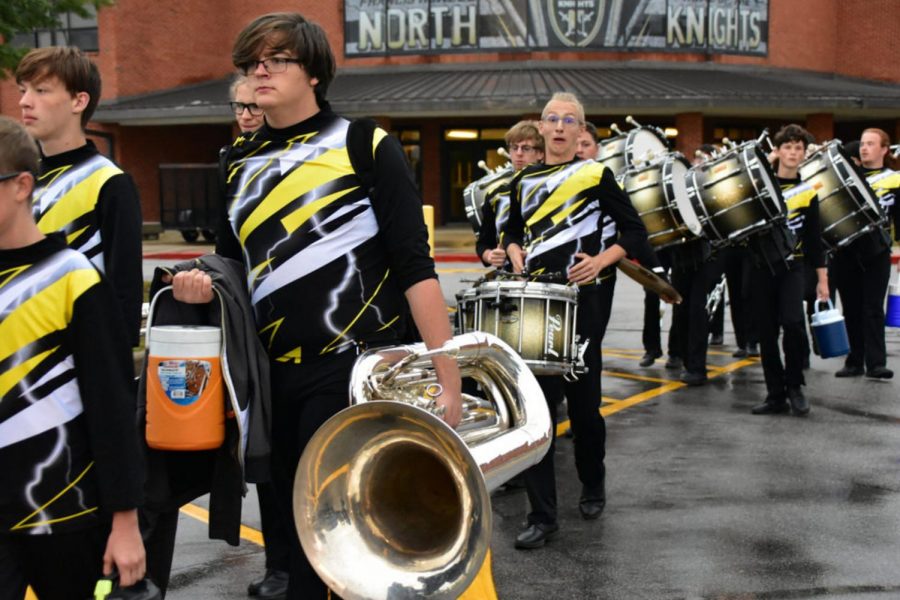 Senior Ben Mossinghoff walks on to the field during Senior Night & the Varsity Football Game vs. Troy on Oct. 12.

By Leann Smyth and Parker Kilen

Senior Ben Mossinghoff started off as a percussionist in middle school, but during his freshman year he made the decision to start playing the tuba.

“There were a lot of percussionists and not a lot of tubas, so I figured I might as well ask, because I liked it and there was a chance they’d need another tuba,” Mossinghoff Said.

Despite learning his instrument later than most band members, Mossinghoff has been able to match, and even excel in his section.

“I think Ben is a very industrious fellow,” Band Director Rob Stegeman said. “When he puts his mind to things, like most students if they put their effort into it and they have a goal and they make small steps to getting to that goal, I think it’s pretty easy to achieve. He’s a very hard worker and he cares a lot about what he does which is most of what makes people successful at anything.”

Auditioning Oct. 29, Mossinghoff placed second chair tuba in the Metro 8 concert band. With hundreds of students from 29 St. Louis schools, Metro 8 is the competitive climax of the fall season. Mossinghoff was able to secure his position, after his placement last year.

“I was confident, because I knew I had a place in the band,” Mossinghoff said.

Throughout the fall season Mossinghoff consistently practiced scales and technique, setting aside time for practice which he attributes to his success.

“[I focused on] learning the instrument,” said Mossinghoff “Listening to my directors and being able to translate what I learned.”

Preparing for the audition, establishing a clear state of mind was critical to finding calm within the chaos.

“For Metro 8, you’ve got to get out of your head,” Mossinghoff said. “You have to realize it’s not the most important thing. Really just showing people what you can do, it’s the ultimate goal.”

His efforts paid off, earning him a spot within the ensemble.

“I’m happy with it,” Mossinghoff said. “I was surprised because I thought I would’ve done better than I did. Even though I was confident I was going to get a spot.”

Mossinghoff proves to be an asset in the tuba section according to first chair tuba and section leader Quinn Winkeler.

“He’s definitely a lot louder than me and [second chair] Hannah combined,” Winkeler said. “Tubas always need to be louder. He knows what he’s talking about. For his experience he’s definitely amazing. He’s going to go far.”

Along with achieving second chair in Metro 8 he hopes to continue and improve in the future.

“Now I’m using this lesson to learn from it in years to come,” Mossinghoff said.