Siblings Brett and Matt Wells Share a Passion for Hockey 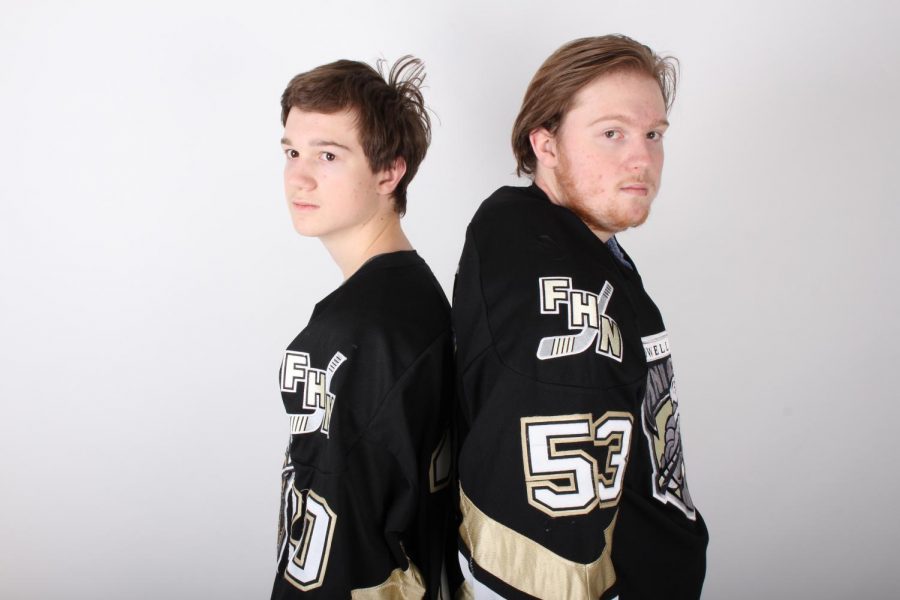 Senior Brett and freshman Matt Wells stand back to back in their hockey jerseys. This is their first year playing on the same team together.

For siblings senior Brett and freshman Matt Wells, hockey has been a big part of their life. They have been playing almost their whole life and now they are playing together on the high school level.

“I love the connection between him and I.” Brett said. “I can always find him on the ice and he can usually find me.”

Both Brett and Matt started skating lessons when they were 3-5 years old, then started playing hockey when they were 6 years old. Brett is not sure if he wants to continue hockey after high school, but Matt plans to become one of the teams best players and eventually play in college.

“I’m hoping to score and get better as a hockey player myself and then go off and play in college.” Matt said.

Their parents, Jon and Colleen Wells, were the 2 main people who inspired them to play hockey.

“Our dad refs hockey, and our mom is Canadian. It’s in our blood” Brett said.

Not only do they enjoy playing hockey, but they also love watching and reffing it as well.

Over the years the Wells family has kept themselves very busy with hockey. Before Brett and Matt were in high they played for St. Peters Spirit which Brett accomplished 2 state championships, and Matt made it to one. They eventually started playing on the JV Knights hockey team, and then made the transition to varsity.

“We’re a hockey family, I’ve been involved with hockey since I was 10 years old. ” Jon said. “Ever since they were born, we were involved in hockey somehow. Even to this day, I can tell their passionate for it because they both referee as well like I do. We’re at the rink 6 or 7 days a week. That passion has to be their for them to keep doing it.”

Over the years hockey has created a strong bond between Brett and Matt, and has given them something to talk about with each other. They also love watching their teammates grow as players.

“I get to make new friends and exercise instead of sitting around and playing video games all day, and it gives our family a reason to go out and do something instead of sitting at home and doing nothing,” Matt said. “I also love how it’s really competitive and I get a little bit of competition every now and then.”