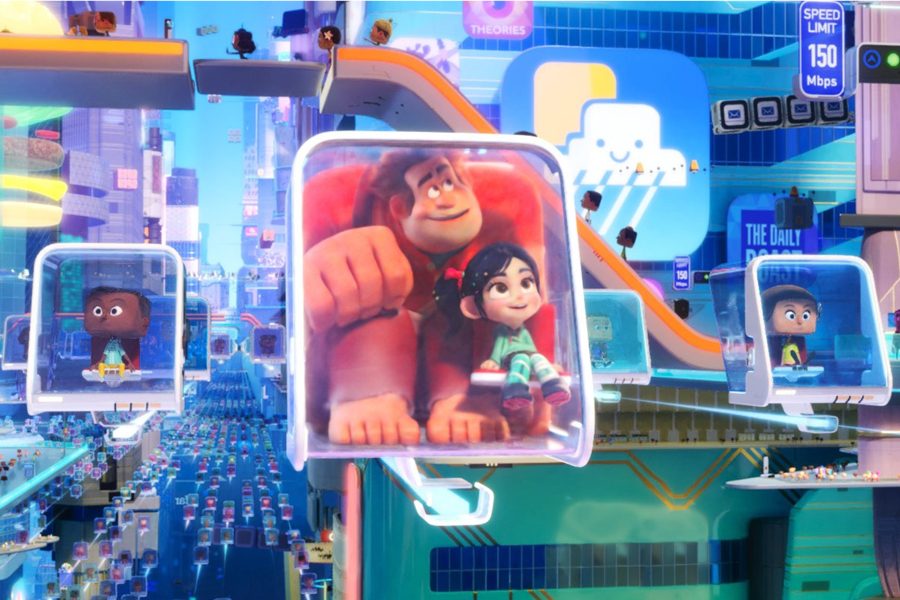 Emotional. Visually appealing. Entrancing. These are some of the few words that accurately describe Ralph Breaks the Internet. Released on Nov. 21, the film has received a multitude of good reviews from various sources, with an overall audience approval rating of 95%, according to Google as of Dec. 12. I absolutely loved the movie. The films catchy art style alone should be enough to entrance the viewer, but mixed with connectable, yet slightly cliché, characters and an interesting plot, this movie is probably one of the better Disney sequels out there.

First, let’s talk about the visual effects of this movie. Considering that this is an animated movie, I would expect the visual effects to be good already, but there’s something about this movie’s art style in particular that just amazes me. I think that it’s just the movie’s ability to use color and certain color palette patterns to set an overall mood. The style of animation also changes based off certain characters. For example, in one certain video game, all the characters are extremely detailed, while in another, the effects are almost dumbed down to show simplicity. The visuals are just very stunning, better than I expected, really.

Next, let’s move on to the next important thing for me, especially in a Disney movie, which is the plot. Plot is extremely important. Disney usually does a decent job of conveying a cheesy, child-like, simple overall theme within a enjoyable yet straightforward plot. I wasn’t expecting much out of this movie, mostly because Disney has a pretty bad track record for sequels, don’t even get me started on their Star Wars movies. I was expecting a rather large lack of plot, and more just senseless wandering through the internet with little to no reason behind it, but again I was caught off guard. The reason that Ralph and his friend Vanellope enter the internet is because her own game has been damaged and needs replacement parts. I adore the way that the internet was incorporated into the film. I wasn’t exactly sure how the directors were going to portray the internet, but it was pretty unique: each website was like an individual building, run by different programs, like one of the main characters ‘Yes,’ who ran “Buzztube,” a play on Youtube. It’s not just like Ralph and Vanellope could just waltz into the internet and get the parts that they needed either. They learned that places like eBay, where the parts are being sold, function off of real, actual money and have to go about various ways of making this money in 48 hours, before their purchase is made void and someone else purchases the parts. I won’t reveal the end segment of the plot here, I’ll just say that it was very clever and well thought through, incorporating the darker parts of the internet. It certainly sent me for a loop.

Now, onto the characters. Disney kind of went all out here. There were characters from a variety of games, most with unique interests and inner conflicts that you wouldn’t expect out of simple video game characters, like how Fix-It Felix Jr. and Calhoun wish for the craziness of children in their life. The characters were very easy to connect with. Ralph in particular is easy to connect with; his main motivation is that he just wants a friend and doesn’t want one of his only friends to disappear on him. Vanellope is a bit more interesting, she wishes to escape the predictability of life and wishes for excitement in her life. The internet is shown to be the perfect place for her, as it’s completely unpredictable and full of surprises.

Overall, I loved the movie, I thought it was really good, and was pleasantly surprised when it turned out not to just be a useless, flavorless sequel to drag in money from expecting fans. The movie had a genuine plot, interesting characters and actual comedy. I loved the voice acting for Ralph from John C. Reilly, and am extraordinarily pleased that the majority of the cast from the first movie played at least some part in the film. If you haven’t seen this movie yet, I highly advise you to go out and see it.