FHN StuCo to Open New Spirit Store in the Commons on Jan. 29 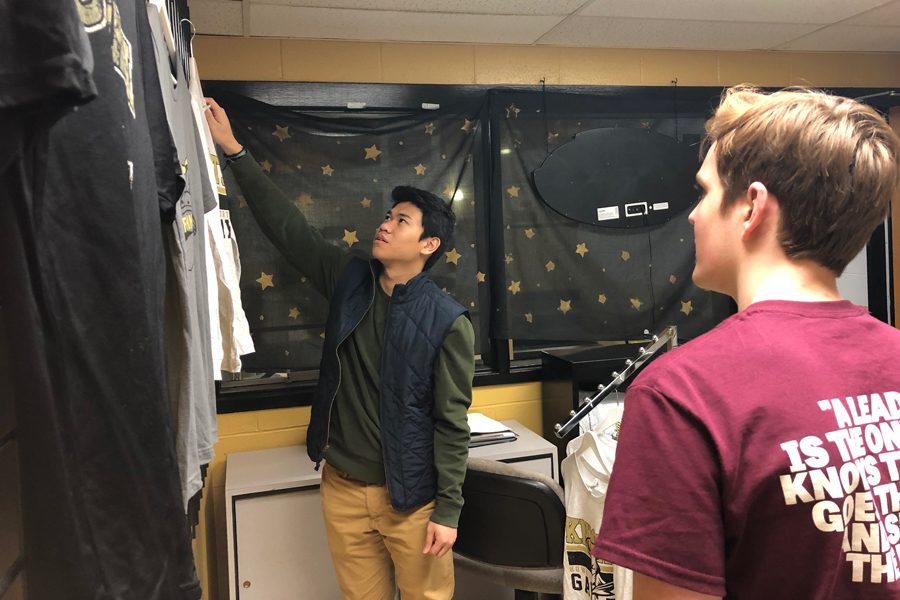 StuCo Vice President Juan Alega and StuCo Brendan Gannon discuss items in the new StuCo sponsored spirit store, The Armory. This store will open on Jan. 29, after almost a year of planning.

FHN StuCo is kicking off the new semester with a new addition to the FHN Community. StuCo, is proud of it’s growing community in engaging with students, faculty and parents. The student run club is sponsored by English teachers Shelly Parks, Amy Stoker and Jani Wilkens. This year StuCo really wanted to promote FHN and the amazing community it has become by opening a school store, entitled The Armory.

“It was mainly to meet other people in the student councils and get new ideas for different things to implement back home at our schools,” Wilson said. “It makes everyone more motivated to make our school a better place and it was like a team bonding.”

Returning from the MASC State Convention, Gannon and senior Juan Alega, StuCo Vice President, brought the idea to their StuCo Cabinet and StuCo officers who decided they wanted to have a school store. StuCo worked with Activities Director Michael Janes and Head Principal Nathanael Hostetler to approve their idea for the store. StuCo wanted to open the store to promote school spirit, and opening a school store to achieve the goal of promoting was a game changer.

“People will be representing FHN around the school and in public, which will expand FHN Community,” said Gannon.

The store will be located in the Commons where laptop stickers, past game day shirts, zip-up hoodie, sweatshirts and long sleeve t-shirts will be sold. As for now the store will be open to anyone during lunch periods, StuCo hopes to extend the store hours to before and after school as well, so that any and everyone can purchase the merchandise.

“We feel that since it’s going to be during lunches, it’ll be a better access point for people to purchase,” Alega said.

The store’s workers as for now are StuCo officers and cabinet members, but StuCo is trying implement other clubs to work at the store such as National Honors Society, or allowing a parent to supervise the store. All money received will be going back to support other clubs, starting new clubs and overall funding for StuCo.

The Armory’s Grand Opening will be at 7 a.m. tomorrow in the Commons, with the chance for students to win a door prize.