Knights get First Victory in Over a Year in Founders Cup 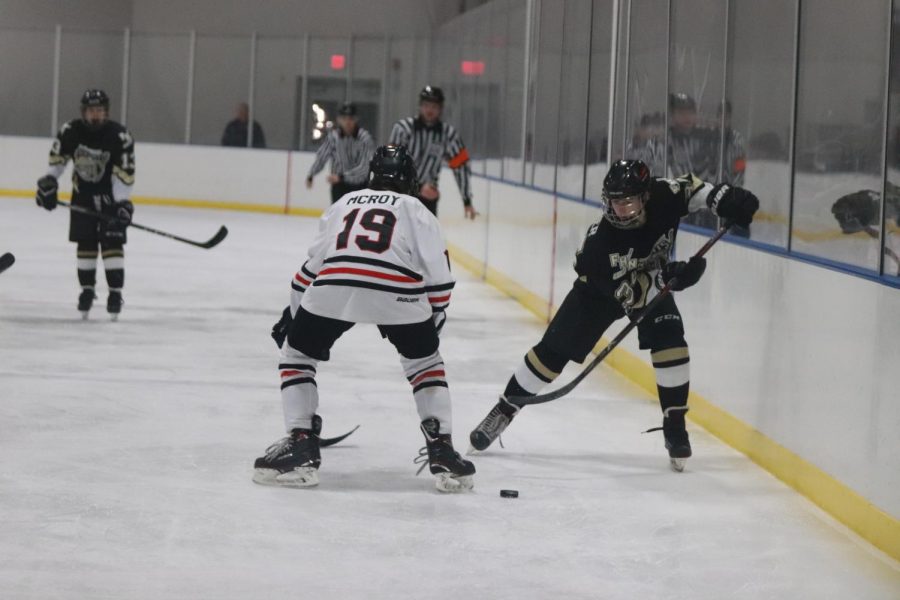 Freshman Derek Archer passes the puck up the boards. As a freshman it was Archer's first year on the team. Archer played center for the Knights this season.

On Feb. 1st, the Knights Varsity hockey team played the St. Mary’s Dragons in the Founders cup at Lindenwood ice arena. The Knights won the game 6-0, winning their first game since Nov. 7th, 2017 against the Holt Indians.

“I feel my positioning was better than most games,” freshman goalie Max Bante said. “After the first period we were only winning 1-0 [and] knew we needed to do way better but we pulled it together and ended up winning 6-0.”

The Knights will be playing the Timberland Wolves on Friday at the St. Peters Rec Plex in their next playoff game. The Knights have not won against the Wolves yet but are very confident about that game, especially after defeating St. Mary’s.

“[Our goals are to] make it closer than last time which was a 6-1 loss. If we make it closer it’ll be a lot tougher on them since they don’t have a lot of players just like us,” Bante said.

Overall, it was a huge victory for the Knights not only being in the Founders Cup and getting their first win of the season in over a year, but also being their first shutout in a very long time. The team also scored the most goals in a game since the game against Holt.

“We haven’t won as many games an we were hoping for this year but playoffs are still a real and valid thing and anything can happen in the playoffs and I believe that firmly we’ve held close games to other teams that we’ll be playing against in our playoff bracket,” head coach Ryan Gannon said. “I do feel if our team can come out with 100% effort for three periods, we can put together some wins and possibly win our playoff bracket if capable. It’s gonna take a lot of effort and ambition but I always think we chance. We don’t quit, we represent the knight proudly on our sweater, and won’t stop till the season’s over.”