Varsity Boys Basketball Falls Short in the Pink-Blue Out Game 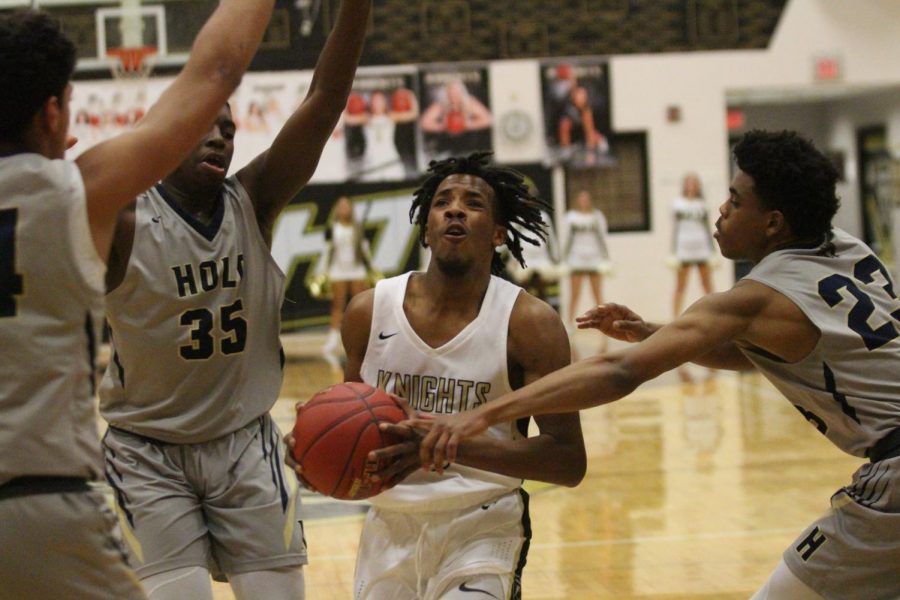 Miles Montgomery drives to the basket for a layup.

With the season coming to an end, the Boys Varsity Basketball Knights were looking to finish off the season strong, especially with a win against the Francis Howell Vikings. On Feb. 8, the Knights fell short though, losing the game 92-54 in the pink and blue out game. The Knights kept it close when the game first started but with the start of the second quarter the Vikings started to pull ahead and take away the game.

“We came into this game very prepared for them {Vikings}, we practiced hard and made sure we perfected our plays for the game because we knew it was gonna be a big game,” Coach Davis said. “We had the edge at first but they {Vikings} started to pull ahead and we ended up losing the game by a big margin.”

The blue-pink out game was very significant in the fact that everyone at the game wears either pink or blue in support of Breast Cancer. But this time around they added blue because one of the girls basketball players mother’s got affected by colon cancer so they wore blue in support of her. Before the boys game and after the girls game all the players had jerseys made out of paper that was all decorated and had all the numbers of each players on it. Each player gave their jersey to one individual in remembrance, or in support of fighting cancer.

“Everyone comes out and supports the team,” Derrick Penny said. “The energy everyone has in unreal and the players get really into it since everyone is cheering and screaming all throughout the game.”

With only having 3 games left in the season the knights look to do very well in the upcoming games. Their senior night in on Feb. 19, against Fort Zumwalt West Jaguars. Senior night is where we all celebrate the seniors and what they have done for the program.

“Putting forth the effort and time to practice will pay off if we want to finish off the year strong,” Miles Montgomery said.