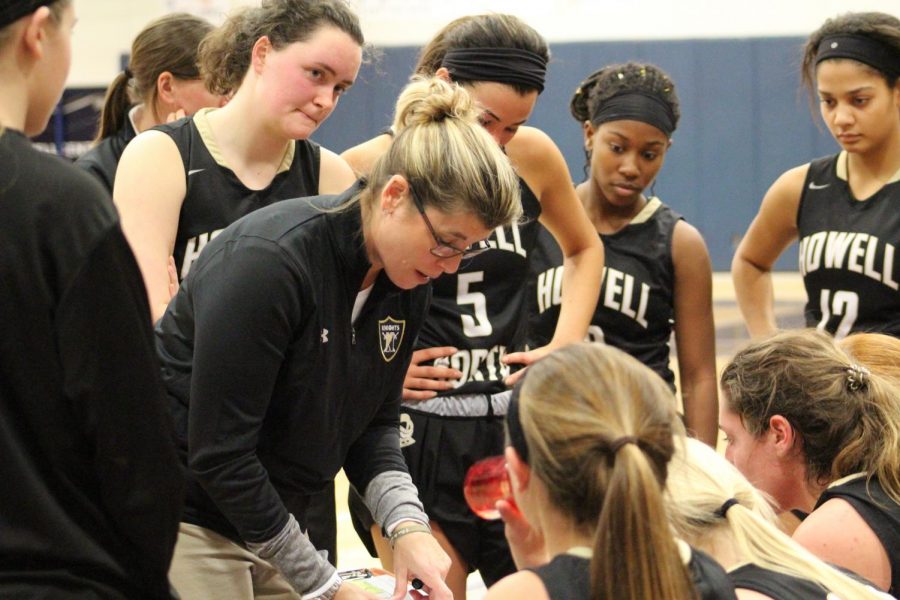 Coach Dawn Hahn discusses strategy with the girls team during a game against FHC. The Spartans would win the game 58-25.

The FHN girls’ basketball team has made huge improvements from last season, like getting first place in the Warrenton tournament and beating FHHS every time they play against them. Last year, FHN finished at 6-20 and now they are 16-7. That’s over twice the amount of wins and with the season almost over other than elimination games, the games lost shows there is still room for improvement.

“There are definite areas we could improve on, like limiting our turnovers, making sure we’re making correct passes and making sure we run the floor a little bit better,” head coach Dawn Hahn, who, earlier this year, notched her hundredth win as a coach said.

Practice has been a key part of FHN’s success. They practice every school day for an hour and a half to two hours. The pace of the practices are fast to live up to the speed on the court and prepare them physically for the games.

“We’ve done a lot more situational stuff and stuff that will go along with game specific, instead of just basic drills,” senior Corrine Stevens said.

Although there was an impressive amount of improvements on the team this year, there’s always a way to improve. With districts ahead there’s even less room for mistakes for FHN to push forward in the race for state.

“We’re working extremely hard while we’re on the floor, we create a lot of energy for each other and celebrate things going right,” Hahn said. “They just really want to win for each other.”