The International Corner: The Venezuela Crisis 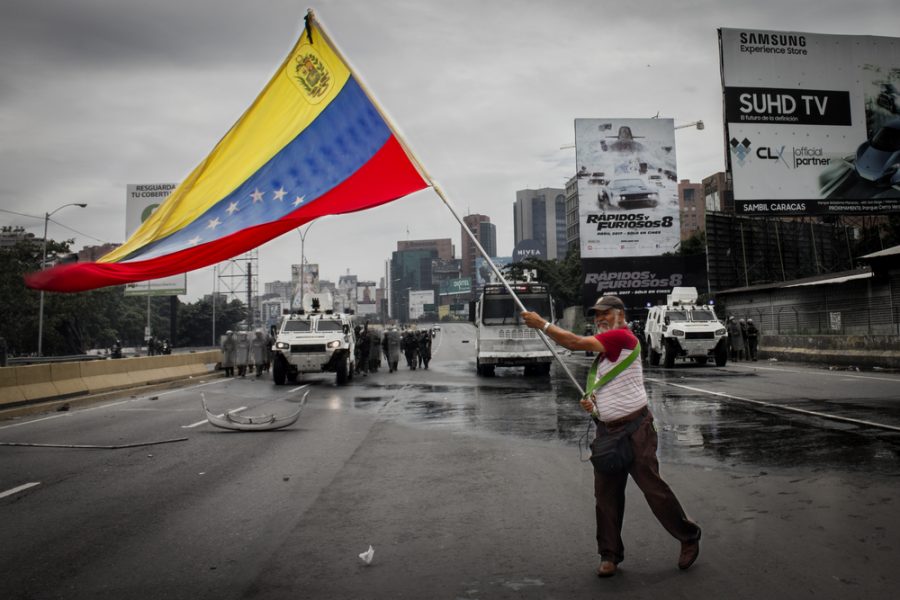 CARACAS, VENEZUELA - MAY 3, 2017: Protest in Caracas, Venezuela. Deputy of the National Assembly holds a Venezuelan flag when the protest is repressed by the Bolivarian National Guard with tear gas. - Image

Crazy dictators are nothing new to Latin America, during the Cold War most countries in that region had some sort of authoritarian or nationalistic dictator in power. Venezuela is different from most countries, Venezuela has oil. In fact, Venezuela has the largest oil reserves in the World. Oil is what makes the world turn, at least until another fuel source comes around. In the past, the country used the oil to become one of the wealthiest nations in South America. Recently the country has gone into a deep depression, the failing Socialist government has failed to provide food and proper services for the people. So how did we get here?

Back in 1999, the then democratic government elected Hugo Chavez, he promised reforms and changes that would make the country prosper again. Hugo Chavez was a socialist, ever since his election his government has garnered support from China and Russia. These two world powers have kept Venezuela afloat for all these years by buying it’s large amount of oil output. President Hugo Chavez died in 2013, his successor Nicolas Maduro ruined the economic success that Venezuela had achieved. Over six years, from 2013 to now the living conditions have worsened to the point where Venezuela may be a failed state.

Under Maduro’s government the food insecurity of households in Venezuela has risen to 80 percent, according to a 2018 nationwide study. In addition to the neglect of human needs such as food and water, Maduro’s government has made great efforts to silence all opposition of any kind in Venezuela. Non-violent protesters are regularly beaten by security officials or are falsely imprisoned in the country’s many jails and prisons. Torture and abuse has also been reported in the many detention centers of Venezuela, many prisoners are kept for extrajudicial reasons.

Venezuela is one of the main countries that has the most surveillance, thanks to help from Chinese technology companies. ZTE is one of them, recently they’ve help manufacture ID cards with chips. These cards are called Fatherland cards, they track all personal information; such as: voting information, medical history, criminal records and financial statuses. These cards are used to keep the citizens of Venezuela loyal to the socialist party, these cards will guarantee cheaper prices on everyday goods and medical services. Others who don’t use the cards will have to deal with the high prices of goods.

Maduro’s government has mainly been allowed to survive only due to the billions in loans the government has received from Chinese and Russian Investment. The Russians sold the Army and Air Force: Kalashnikov rifles, Sukhoi fighter jets, and Igla-S surface to air missile launchers. These launchers have also been found in possession of extremists. Keep in mind that Venezuela is in a serious economic decline, so how will they repay the multiple loans and the billions and debt that they owe to the Russians and Chinese? They won’t. The country belongs to China and Russia, It’s theirs now. As long as the Chinese and Russian government hold control over Venezuela, the people there will never be free.

Change may be on the horizon, a new democratic president has been chosen from amongst the people by the people. His name is Juan Guaidó, he right now is probably the largest threat to Maduro’s rule. Guaidó has garnered support from the United States and multiple European countries. Guaidó is the leader of the opposition party, which has been subject to harassment from the Venezuelan security services. Guaidó himself was detained for a short while after his announcement of becoming president.

President Trump has put his personal support behind Guaidó and has taken many measures to help secure his aim to become the legitimate President of Venezuela. On Feb. 18, Trump gave a speech at Miami University pleading to the Venezuelan Military to back Guaidó’s presidency. He said, “We seek a peaceful transition of power, but all options are open.” The possibility of using the U.S. Armed forces is a strong deterrent that could prevent Maduro from taking any action against Guaidó, but this move may create a second Cuban Missile Crisis. The Russians have stationed two Tupolev 160 nuclear bombers in Venezuela, which pose a very large threat to security in the region. It is unclear if President Trump will make a decisive decision in the coming months, but whatever happens will be a history changing event.