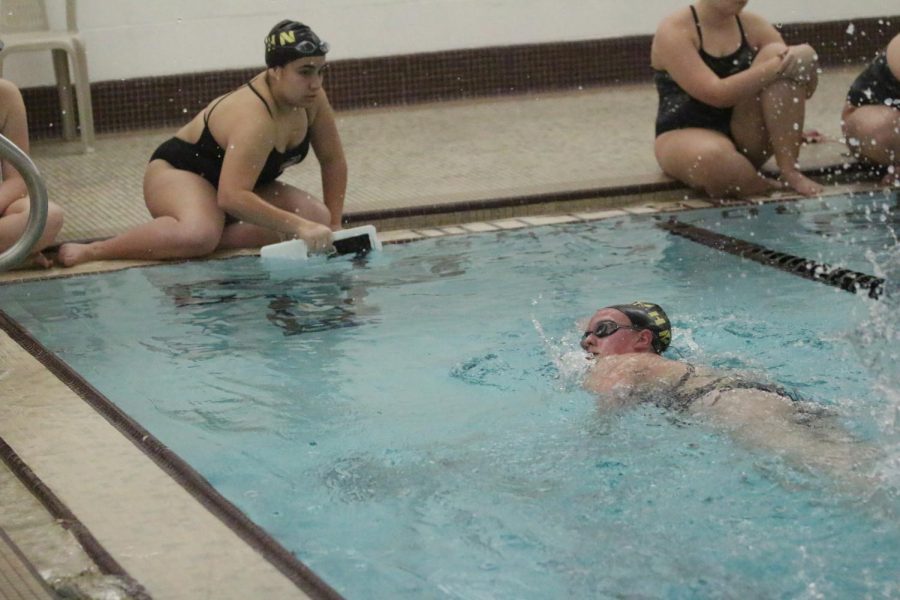 Throughout the girls’ swim season, there was a mix of dual meets, tri meets and invitationals. The season record for dual meets and tri meets was 5-7. At McCluer North relays, the team placed fifth out of eight teams. At the FZN relays, they placed seventh out of 11 teams.

“My goals this season were to become a stronger swimmer,” sophomore and team captain  Olivia Neunaber said. “I never had any specific time goals but I did end up getting a PR in the 500 meter free.”

There was an addition of 12 new swimmers this year. This helped the team in many ways, such as creating competitive line ups for meets and letting the girls try different events.

“It was really rewarding to see the number of girls that came out this year,” assistant coach Chris Palladino said. “We had a number of young swimmers that had not swam competitively before and by the end of the season, they were competing at high levels.”

This year, the coaches worked to intensify practice sets in order to push the swimmers. This allowed for girls to drop times and compete at higher levels. The practice helped senior Kamryn Bell qualify for state, which took place on Thursday, Feb. 14.

“What I enjoyed throughout the season was seeing the way our team has grown,” Neunaber said.

A big focus for next season is to focus on getting the girls to push themselves and compete at high levels in order to better themselves along with dropping time.

“I am really looking forward to having a good core group of girls return next season,” Palladino said.  (Brief by Claire Huss)