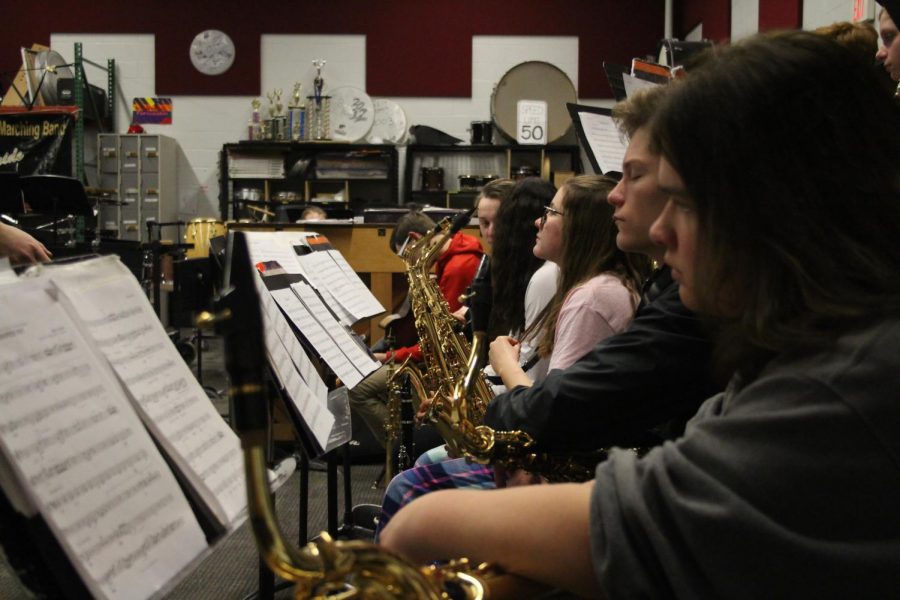 Jazz band plays during class, preparing for a competition. They plan to perform three songs, competing against other high schools in the area, The band is hoping to impress at the ‘Music for All’ national competition.

Jazz Band has an upcoming national level contest that is run by a company called ‘Music for All’ on March 2 at O’Fallon Township High School.

To rehearse with the whole band can be quite a challenge for just one teacher. Band director Rob Stegeman identified these challenges and how they stay motivated.

“I think the biggest challenge is basically just getting it done in that amount of time,” Stegeman said. “We have to put it all in one beautiful piece. Honestly, focus is the biggest thing. Students need to come in with the right amount of preparedness so we can put it together in the first place.”

Many things go on at the events such as getting an opportunity to compete with other high schools and bands. Band members have their own favorite parts of these competitions.

“The moment after we are done performing is my favorite,” senior and  Jazz Band member Abbie Chruma said. “People are clapping and it’s a really great feeling. Repetition is the biggest thing. The more you do it right the better.”

While the students have their own favorite parts, Stegeman, who is in his third year at FHN, has his own.

“I think every musician is a teacher in some way,” Stegeman said. “When you play your instrument you are sharing yourself with other people, they can pick that up from you, parts of your personality. It’s just passing along of the love of music, which is a great thing for me.”