Michelle Walker and Mike Hoehn Re-Elected to Board of Education 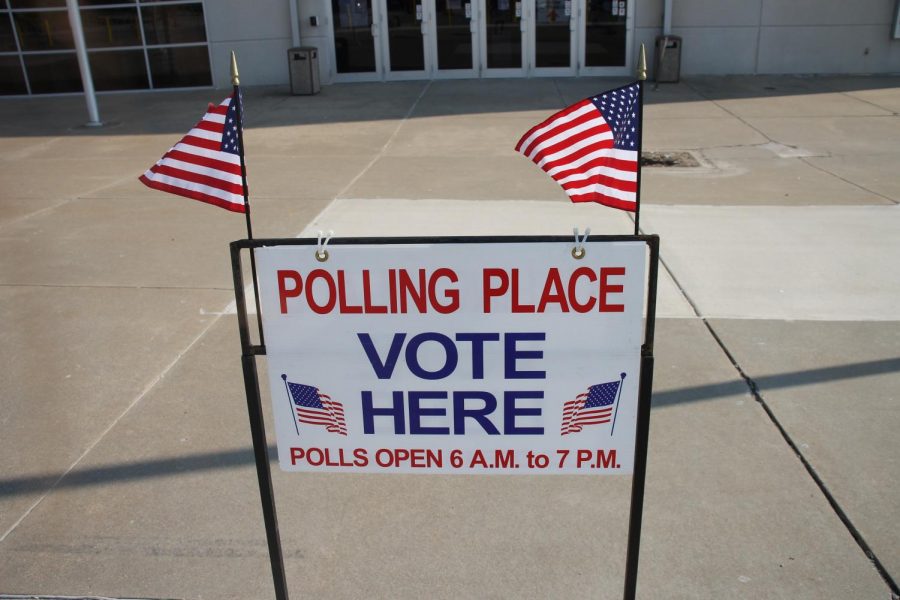 A sign sits outside the Family Arena to show voters where to vote. This type of election happens on odd years and is used to determine which candidates would be chosen. Many locals came to the Family Arena and casted their votes on April 2.

Current directors on the FHSD Board of Education, Michelle Walker and Mike Hoehn, were both re-elected as their active three year term expires this year. The two were running against Sandra L. Ferguson. Walker received 37.6% of the votes and Hoehn received 34%, while Ferguson received 27%.

Every school in the district was a polling area on April 2, causing classes to be out for the day, as residents visited to cast their votes on who would aid in district decision making. Each voter was given the ballot with the three candidates names and voted for two of them. Walker received 4,253 votes, Hoehn had 3,853, Ferguson had 3,059 and there were 156 write-in votes.

The two winning candidates worked together in campaigning for this election. Walker described the campaigning process as exhausting and tiring. Four months before the election date, Walker and Hoehn began to send out postcards to registered voters in the area, placing signs across the area with help from their kids and taking to social media platforms like Facebook and Instagram to spread the word. They advocated for each other and supported each others’ efforts to remain directors on the board.

“We have over 40 different polling locations so being able to split all that up was very helpful,” Walker said.

During her previous term, Walker worked on supporting the CAPS program as well as cutting transportation and busing costs for the district. She intends to work with the district’s strategic planning committee during her upcoming term and follow through with the projects arranged for the future. As a parent of three kids attending schools in the district, Walker always considers the impacts on the students when voting, planning and making decisions that will affect their education.

“It makes it more personal,” Walker said. “I’m not only voting for the kids in the community. I’m voting for my own kids.”

This is Hoehn’s fourth term and eleventh year serving. In his terms, he has worked with managing district projects and the renovation of FHHS in 2008. During his upcoming term, he plans to continue this as well as managing a stable budget for the district and creating a larger deficit. Hoehn, father of three FHSD graduates, keeps the students in mind every time he makes a decision or when voting on a resolution, as their education is his top priority.

Hoehn did not comment but he has stated in the Mid Rivers Newsmagazine “I will continue to balance the many needs of the district and always put the students first. […] I have a grandchild that is in the district and am committed to seeing that every child that attends Francis Howell will receive a great education.”

Their terms as directors will expire after three years and they’ll need to rerun for their positions in the 2022 election. Walker and Hoehn plan to work hard to help FHSD and its schools be the best they can be with their position.

“I was really really proud of her [Michelle Walker]. I think that she’s very deserving,” said freshman Mya Walker, daughter of Michelle. “She has her heart in the right place and wants the best for not only my education but for my friends and any student in our district. It was really exciting [when she was elected] and I liked to see how excited it made her.”