Take a trip to the DMV 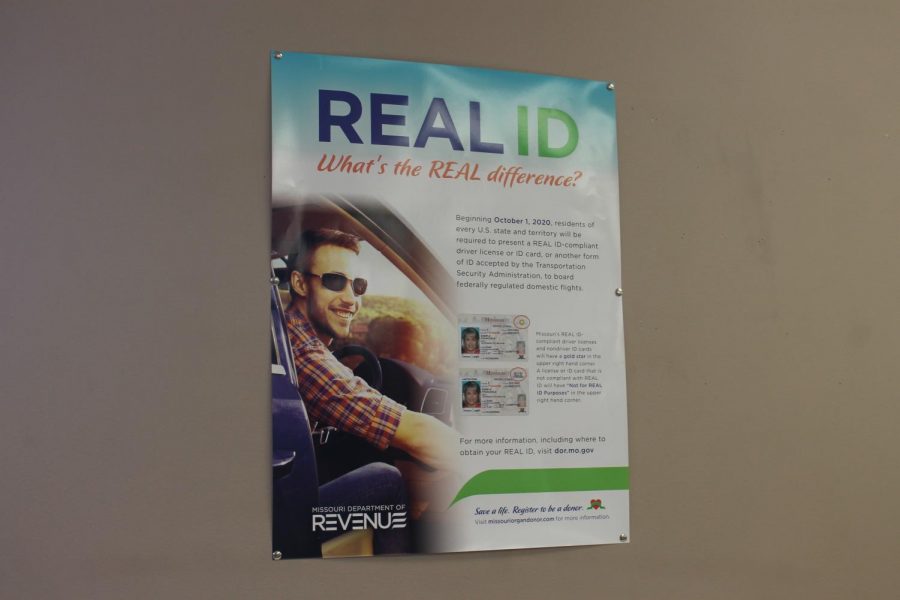 A poster hangs on the wall in the DMV to show that Missouri is making new ID’s. Missouri’s old ID’s have been around since 2005 and older. The change finally happened in March when they decided to go with the REAL ID idea from the Federal Government.

Missourians are now able to apply to obtain REAL IDs at their local DMV and receive it in 10-15 business days. REAL IDs originates from a federal act from 2005 to establish standards intended to protect U.S. citizens from fraud and terrorism, and are the same as IDs with a slight change in appearance. Every U.S. state and territory will have to comply with REAL ID issued guidelines by October 1, 2020.

Missouri citizens don’t necessarily need to apply for this card immediately to have it by Oct. 1. These IDs will be needed if someone has to access a federal facility, nuclear power plant or board any domestic flight. If one does not do these activities frequently, then having any Missouri compliant ID will be acceptable use after the deadline, and the only difference between IDs and a REAL ID acceptable card is that the REAL ID has a yellow circle with a white star in the middle and a standard identification card does not.

“Rarely do we fly in a plane so I don’t think it will affect me that much,” freshman Riley McBride said.

Most states already comply with this act, but Missouri has repeatedly asked for an extension. Lawmakers have been resisting the law due to the risk of a security breach because the government scans and keeps copies of personal documents, such as social security cards. This year though, Missouri has started to accept applications so that the state will be ready for it to be established in October of 2020.

When one of Missouri’s extensions was running out in 2017, people were worried they would have to travel with their passports, but now just knowing about it in the first place is the bigger issue. If a person is trying to board a flight only using their state ID as identification, without the REAL ID, they will not be able to board the plane. However, other forms of ID such as a passport or Permanent Resident card, will still work to board. Needing a new ID is not prevalent in Missouri citizens lives, especially for the younger members of the state.