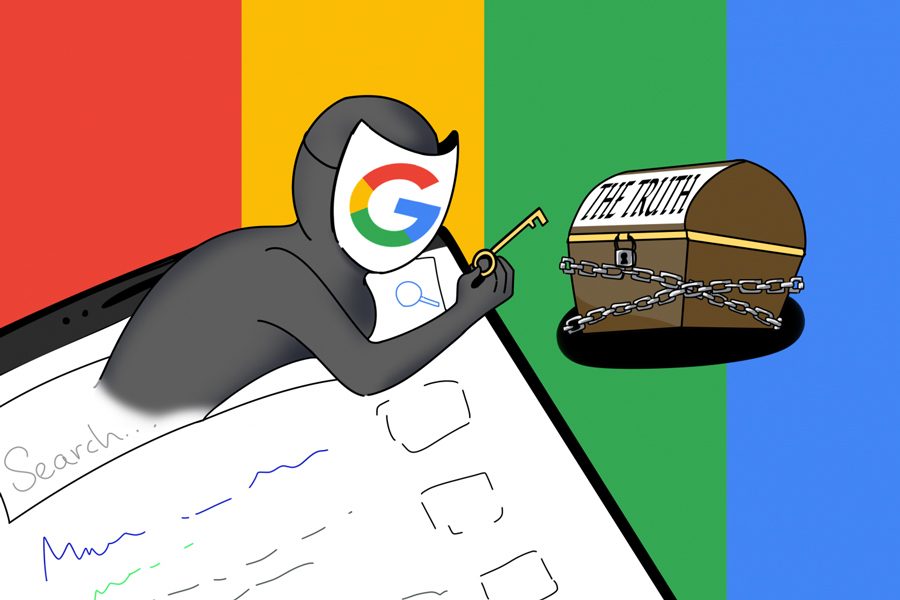 Historic photo of Google locking the truth away, preventing it from reaching the public (1944 Colorized)

Would you trust the government to choose what is true and what is false? Would you assume they had a conflict of interest or ulterior motive in doing so? Would you trust a particular organization like the National Rifle Association, the Democratic Party or PETA to determine the truth on your behalf? Are you willing to shed the capability for you to read news and determine if it’s true or not? Do you want a world where “fact-checkers” are out of the equation because apparent false information is already restricted by an institution bigger than yourself? These are the very methods Google is employing in its fight against supposed “fake news.”

Google, despite its claims to the contrary, has been acting as an “Arbiter of Truth” through intentional manipulation of its algorithm. A study conducted by American psychologist Robert Epstein found that if Google prefers one candidate over another in search results, it can shift support for a candidate from 20 to 90 percent among undecided voters. Has Google used its power in this way? The European Union seems to think so, for they fined Google $2.7 billion for biased search results in 2017. Google has also manipulated its algorithm for petty reasons. An article by C-Net details how Google intentionally tweaked Youtube to promote videos praising Marvel’s Captain Marvel by considering them “news videos,” while simultaneously suppressing negative reviews.

In a more serious tone, a 2016 investigation by SearchEngineLand revealed that Google was intentionally suppressing anti-Hillary Clinton auto-completions while leaving anti-Donald Trump ones in place. Google’s internal documents even reveal Google’s willingness to socially engineer the world. In a leaked 85-page internal memo, Google refers to itself as “The Good Censor” that is trying to balance censoring what they deem “harmful content” with promoting free speech. Google ignores the obvious problem: once you restrict “harmful content”, free speech is dead. As George Orwell wrote in his preface for Animal Farm, “If liberty means anything at all, it means the right to tell people what they do not want to hear.”

However, Google’s ability to manipulate its algorithm at home is nothing compared to what it has been trying to accomplish abroad. At one point, Google was working on a search engine for China called Project Dragonfly. This engine could systematically block access of Chinese citizens to topics the Communist Party deemed wrong that includes criticism. This was such encroachment on the fundamental ideas of the Internet that employees inside Google rebelled and the project was shut down; however, TheVerge reports, many at Google expect the project is still going on in secret due to the code still continuing to undergo changes. Is Google simply waiting for the controversy to die down? Waiting to release software that would destroy freedom of information as we know it?

There is nothing stronger than information, but we’re so scared of being fed misinformation that we have ignored the harms of putting our trust in companies like Google. As consumers, we hold some power. Using competitors of Google such as DuckDuckGo, or being a little more critical of what Google is trying to tell you, sends a strong message. Google can’t become an arbiter of truth, because their truth is based on their own deception.