The start of something new 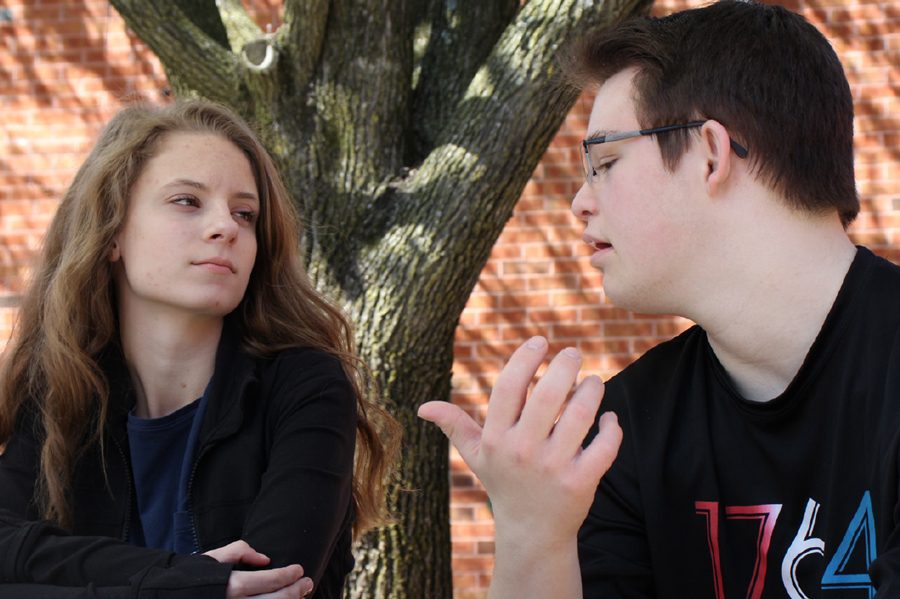 Friends, sophomore Allie Moore and junior Bret Hammond, sit and chat in the courtyard. The pair have been friends for over a year and have formed a very strong, unique bond. They frequently go out to sporting events together and participate in many fundraising events for Down Syndrome.

Sophomore Allie Moore and junior Bret Hammond have a unique relationship. Bret has Down Syndrome, and Allie’s mom, Leslie Firebaugh, was Bret’s paraprofessional all throughout middle school. Their parents grew a bond and became close. Bret’s parents invited Firebaugh to a night of trivia last year so Bret stayed with Allie. Their friendship began in middle school, following a night of trivia and a game of Uno. The two have known each other since then but just became close at the start of Allie’s freshman year.

“I was excited to get to know him,” Allie said. “I was confident that we would get along just fine.”

Their bond grew over time and still continues to grow by hanging out, going out to eat and watching sports such as the Blues and the Cardinals, just like true friends would do. Allie and Bret started hanging out in 2018 and haven’t stopped since. Allie’s friends wanted to get to know him because of how important he was to her, so she introduced her friends to Bret and they all go and do activities together outside of school. According to James Hammond, Bret’s dad, everywhere Bret goes, someone knows who he is and recognizes him.

“I reached out to Bret because he has many people who are nice to him and care for him and ask if he’s okay, but not many people go out of the way to show him it’s a true friendship,” Allie said. “I wanted to be his friend and I really enjoy spending time with him.”

Allie and Bret both volunteer and do fundraising for the Down Syndrome community and see each other at events. Bret does more of the activities and participates, but he is one of the top fundraisers and gets to walk Step Up for Down Syndrome. Step Up for Down Syndrome is one of the many events they go to. It is an annual walk held in downtown St. Louis to help support and fundraise for Down syndrome research. There is food, drinks and a lot of people. The highest fundraisers get to attend Walk in the Park, where kids and families walk on the field of the Cardinals game. Bret donates the first pitch to other kids that don’t get the opportunity to raise any money since he has already got that opportunity he wants to share it with other kids as well.

“He has more compassion than anyone his age, if you talk to him one time he will touch your heart and change your life,” James Hammond said. “Bret is more alike than different, he craves to be like everyone else.”

These events are organized by DSAGSL, which stands for Down Syndrome Association of Greater St. Louis. Bret has his own team called Bret’s Best Buddies, and they fundraise for the Down syndrome community and participate in the DSAGSL events.

“We have made a team and walked every year since Bret could walk,” James said. “Bret even has his own Best Buddies logo.”

Bret is a huge sports fan and never misses a game. The Hammond family loves to bring Allie along to watch and enjoy the games with them. He is involved in many sports. He plays golf for FHN and participates in an annual golf tournament with Carlos Martinez, a Cardinals baseball player.

Bret has been playing basketball since he was 4 years old. Allie has been supporting him ever since she met Bret. He started at the YMCA. He joined the all-stars basketball team at 15 years old. The all-stars basketball team has 12 special needs players and 10-12 celebrities that play with them including Albert Pujols, who has is own foundation called the Pujols Family Foundation. Bret claims he loves playing with his friends and seeing all of his fans, Allie being one of them. She has been to many of his sports events and loves seeing the joy on his face when he is out playing or watching sports.

Bret has spoken on live radio stations, talked to crowds of over 600 people and been in commercials. He has truly touched many people’s lives by just talking to them: one of these people being Moore.

“He has inspired me to be more involved in the Down syndrome community and he has made me be a better person,” Allie said.