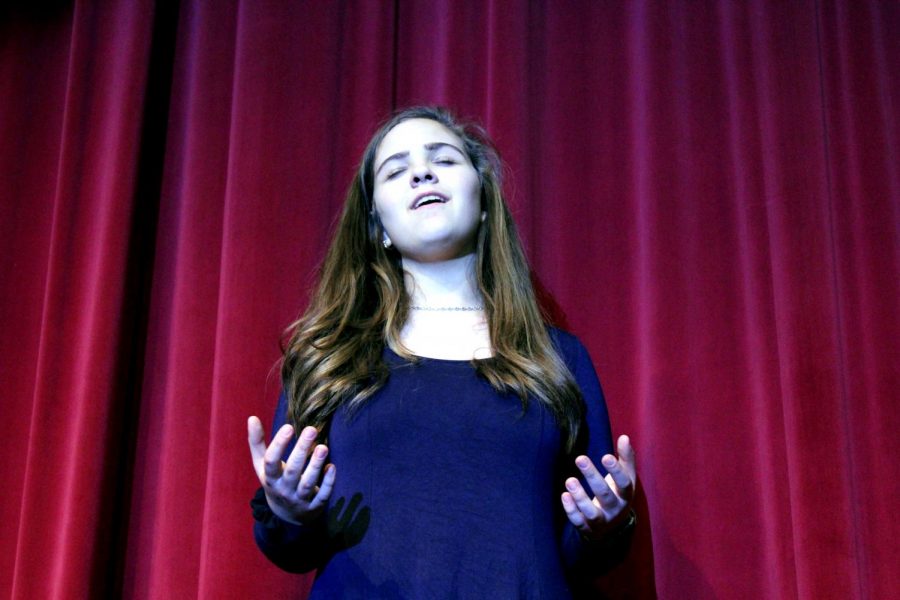 Sophomore Zoë Meier sings on the auditorium stage during her rehearsal for State Choir competition. Meier has been attending singing lessons since she was 12 and has been involved in musical theater since she was 8. She plans on continuing singing as a career in the future.

Singing and dancing around the room, a 2-year-old girl tells her grandparents their lines and cues again. The performance has to be just right by the time her mother comes to pick her up.

Since she was very young, the performing arts have been a giant part of sophomore Zoë Meier’s life, and she fell in love with singing opera at 11 years old.

“I always loved singing, I just really enjoyed it,” Zoё said. “I auditioned for a ton of stuff during the year, and so then my mom actually recommended me to audition for the Union Avenue Opera’s Doubt and it was a summer show. And so I auditioned and then I got in as a named role, and I guess things just kind of took off from there.”

Being technically trained in musical theater, Zoё expands on her wide range of talents. She continues to study dance at the Center of Creative Arts (COCA), sing in Knightsound choir, where she made it to state, take private voice lessons and be involved in many school and community plays and musicals. Zoë has performed in Joseph and the Technicolor Dreamcoat and Footloose with Wentzville Christian Church, and she has acted with Young People’s Theater for several years. However, the journey in opera is quite different than what she was familiar with, as opera requires extensive discipline and intense training in a totally different technique.

“We talk about it constantly, referencing the technical aspects of what she is doing and how she’s approaching things,” vocal director Jennifer Crane said. “It has so much to do not only with her mental focus and mental game when she’s approaching different types of music, but also there’s so much serious technique and physical training that goes into it.”

Because singing opera is extremely technical, professionals continue to study it throughout their entire life. Rarely can someone so young dedicate so much time and energy to a long term goal that will require them to go through extensive training, but Zoё doesn’t let anything stand in her way, and went on to perform in the Union Avenue Opera’s Hänsel and Gretel.

“She’s very decisive, so if she decided she wants to do something she’s gonna go do it, and I think all those things serve her right,” Zoё’s mother Angela Meier said. “You gotta really work on your craft if you want to do anything with it. It’s gotta be the number one priority and whatever she decides she wants to do, what her big goal is, every decision she makes has to revolve around that decision and that goal.”

Adding to the taxing challenge of learning how to use the vocal instruments correctly, opera singers also have to tackle the language barrier, because many operas are in languages other than English.

“I sing German, French, Latin,” Zoё said. “I think that’s all for me right now because I’m still learning IPA, which is the international phonetic alphabet, and that helps you pronounce every single thing, which you need to.”

The performing arts appear to many as an unrealistic dream that is impossible to make a solid career out of.  In spite of this, Zoё follows her dream of pursuing a performance major in a university and singing professionally in Europe, and isn’t afraid to attack the odds with bravery and determination.

“They’ll tell her ‘it’s a pipe dream’ or they’ll say ‘go get a real job, that’s not a real job’,” Angela said. “But at the same time, I think that she realizes that it can be a real job and it’s a valuable job, and she’s very very courageous about her decision and she’s courageous about what she decides to do. She’s a real leader and I think that her drive and her ambition just inspires everybody around her, including me. And it’s just really cool to see her pursuing her dream in spite of the naysayers and go after it, because it’s valuable and it’s worth going after.”

As Zoё’s passion for opera grows, her dedication makes her unique ability flourish. Crane has been able to watch as Zoё continues to improve her art daily, but what sticks out above all else is her unparalleled drive towards a daunting goal.

“It is a career that does not just require talent,” Crane said. “Talent opens the door, but you can’t go through it, you’re not invited to walk across that threshold unless you have all of these other components behind it. Hard work and dedication and grit and all of these other factors have to be coupled with that talent, and that’s the difference in what makes or breaks somebody’s success. And I believe wholeheartedly she’s got all those factors together that are going to take her really far.”