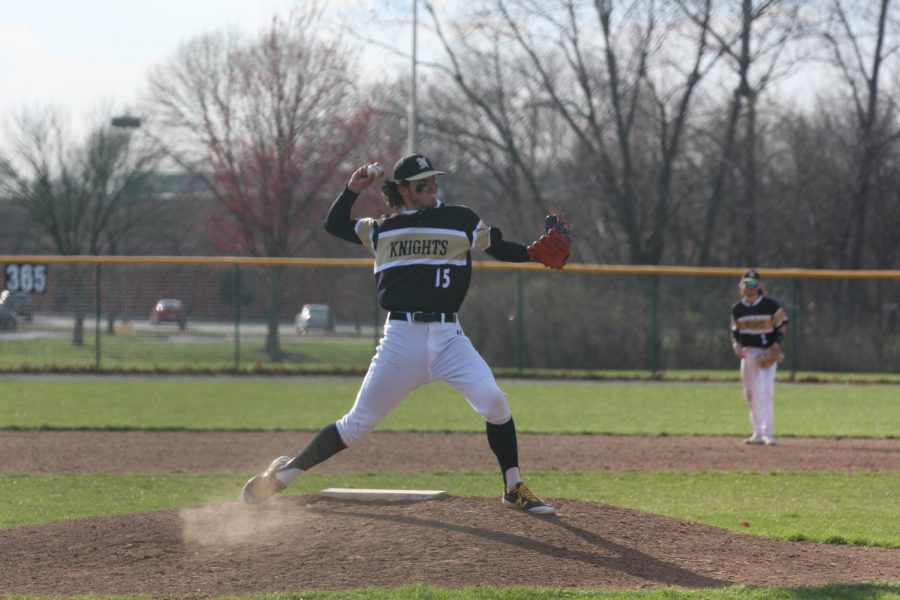 Sophomore Jackson Mitchell attempts to pick off a runner at first base during a game.

Last season, the varsity baseball team had four underclassmen, with three being sophomores and one freshman. This year they only have one underclassman, and it’s sophomore Jackson Mitchell who only played a little bit of varsity last season but mainly played JV.

“It’s pretty fun,” Mitchell said. “I’m friends with most of the team. I wasn’t too surprised [making varsity] since I played a little bit last year, but it’s pretty exciting being a sophomore on varsity.”

Mitchell is a pitcher, and despite being the youngest player on the team, he has made himself one of the team’s best pitchers and is a great role model on the team. His teammates and coaches are very proud of him.

“He’s brings a lot to the table,” head coach Bob Dunahue said. “He’s got a nice frame, he’s got easy throwing motion, very athletic and coachable, he’s always looking to get better, and he lets his actions on the field do the talking.”

According to junior and fellow teammate Nolan Hutson, Mitchell fits in great with the whole team, and is even better this season than last season.

“He’s just grown as a player and has gotten bigger, as time has gone on he’s improved,” Hutson said. “He’s just a really good pitcher, he knows how to locate, and he has good speed at his age.”

Overall, Mitchell has enjoyed varsity very much. He has been playing baseball since he was little and hopes to continue his career in college, but right now he mainly wants to focus on high school.

“I’m just trying to get my way to the top of the pitching staff and hopefully stay on varsity and make some new friends,” Mitchell said.