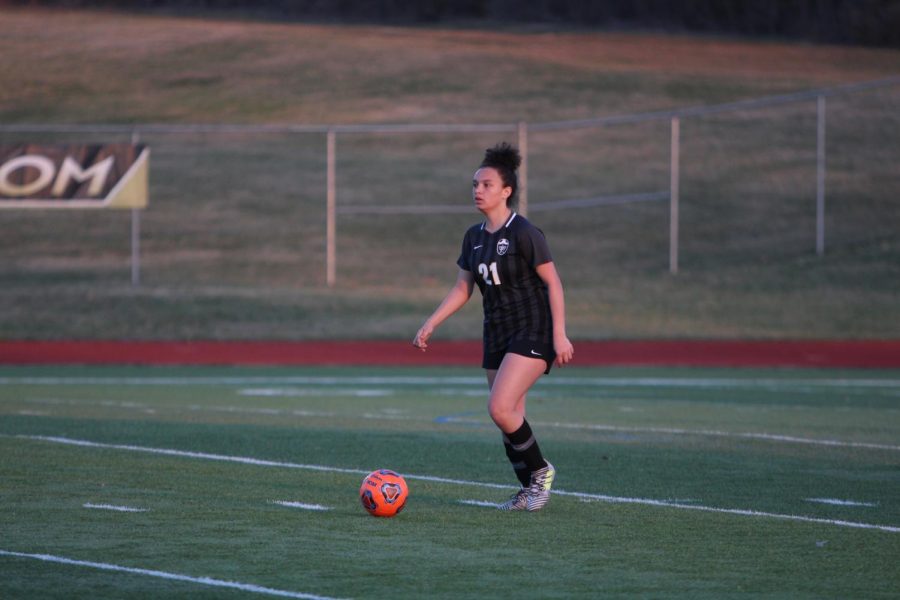 Freshman Makenna Davis dribbles up the field during a game. Davis, along with Jessica Gillen, have been starters on the varsity team since the beginning of the year.

On rare occasions, a freshman gets granted a varsity role from the beginning of their freshman year. This was the case for two freshmen on the varsity girls soccer team: defender and best friends Makenna Davis and goalie Jessica Gillen. While the girls have known each other since they were seven years old, Davis feels that making the varsity team has made their bond grow stronger.

“My bond with Gillen has grown a lot,” Davis said. “We were just friends then, but we’ve grown to be best friends. We talk to each other and hang out a lot, so I think the team has really brought us together.”

After initially making the team back in March, Davis and Gillen have had to work with players up to four years older than them. While it was awkward for the freshman at first, Davis feels that their bond with the team has gotten closer as the season has progressed.

“At first it was a bit weird because it was me, Jessica and everybody else, but as the season has gone on, we’ve become more open and and we’ve mixed into one group and all talked to each other, and it’s gotten a lot better,” Davis said. “I feel that we were more scared to talk to them in the beginning, but now we’re really a team and everyone bonds together.”

As the two freshman have played more and more games at the varsity level, they have grown more confident in their abilities and how they play. They both hope to improve over the next three years on the varsity team.

“I think I can improve on how I talk to my teammates and probably [have] more confidence over the next three years,” Gillen said. “As I grow older, I’ll become more confident and as more people come in from my age group because I’m more close to them.”