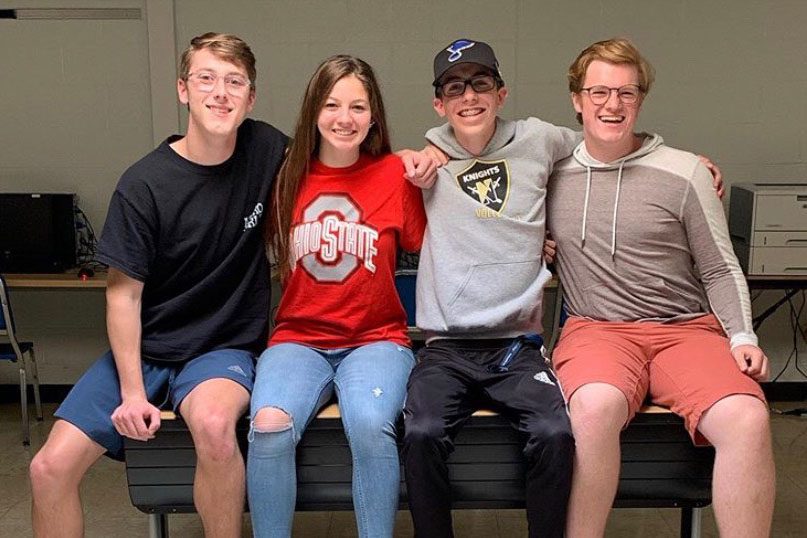 By Michael Willmann and Isabel Bira

Cheering. Chants. Motivation. That’s what the Goonies are all about. You see them at football games, pep assemblies and sporting events all around. They’re the backbone of school spirit and their cheers can be heard across the stadium. Every theme, every cheer, every cry of support comes from them.

The Goonies are a group that requires no official membership.

“If you attend a game, you’re a Goonie,” Goonie Leader Tom Jamison said.

The Goonies are simply a group of enthusiastic students that attend sporting events and school activities, dressing up to themes that are determined during meetings and voted on over social media. They also hype up the crowd and getting them pumped up for the game. Any student who attends a game or event is encouraged to join into the chants and cheers that the Goonie Leaders start.

“It’s a lot of fun for me, and I like making school fun,” Albers Prize said.

This year, the Goonies are looking to attract a new kind of crowd, a younger crowd. The underclassman.

“Underclassmen represent the future of the Goonies,”  Jamison said. “We’re always looking for positive underclassman who can lead by example.”

Jamison believes that the Goonies will help students “achieve leadership roles in years to come”. In the past, underclassmen didn’t know who the Goonies were or what they did and this year the Goonies hope to change that.

“We’ve definitely tried advertising more to underclassmen,” Jamison said. “It’s so much fun to go to the games where it’s really a very positive atmosphere”.

This is what the Goonie leaders want to expose to the underclassman, “it’s like a family” Albers Prize says.

This is the year for the underclassmen to really get involved and help spread more school spirit and pass it on to the students in years to come. The Goonies attend almost every game and encourage other students to attend. For more information and updates on the Goonies, students can visit the Goonies social media, @fhngoonsquad on Instagram.