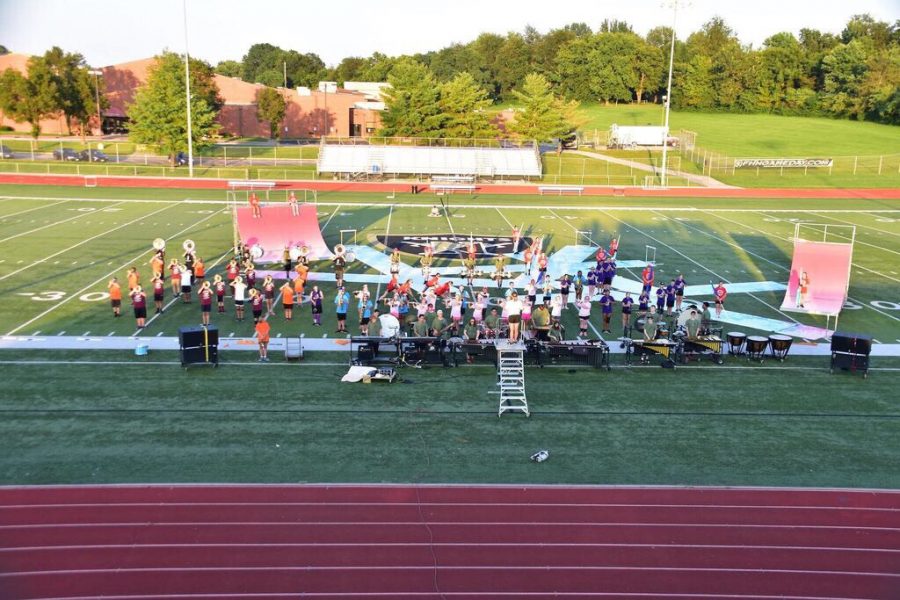 Francis Howell North’s marching band and color guard are kicking off the year with their new theme, “Freeze”. The band director, Rob Stegeman, and his visual team come up with new themes each year which include new music, choreography, and props.  This year is different than previous years because they have new band and guard members to look forward to building relationships with.

“Last year was more about being us, just being energetic, us being a tight knit group, but this year we are trying to do things differently,” Stegeman said. “It’s really tongue in cheek.”

The “Freeze” theme includes songs “Ice Ice Baby” by Vanilla Ice, and “Let it Go” by Idina Menzel. The show is supposed to give the audience the idea of a kid playing in the snow, sledding and having fun. The uniforms include hats, mittens, bibbers and puffer vests with a touch of tiffany blue.

“Every day of the week we practice after school at the stadium, practice varies from night to night, but usually it’s from two and a half to four hours,” Stegeman said. “All of our practices are open to the public as long as people are not being distracting.”

A typical show day for the marching band consists of warm ups, getting the group mentally and physically prepared, sound check and visual set up. Setting up the actual show on a day of competition or show takes four minutes maximum. Tearing down is even quicker, taking only about two minutes.

“I am excited for BOA[Bands of America] Iowa , it’s something new. I was like, ‘Hey let’s go to that one, we don’t know who will show up, we could make it to the top eight,’ The top 10 bands in the country will be there,” Stegeman said. “These are bands with multi-million dollar budgets, but it’s going to be cool,”

With every season comes new obstacles but also comes growth and improvement. Last season’s theme was focused on energy, this year it’s all about having fun. The marching band has many shows this season to demonstrate all the hard work they put into each show.

“I really like this show,” senior Jenna Brown said. “It’s cute and different. I like this concept better. I think we will pull it off,”