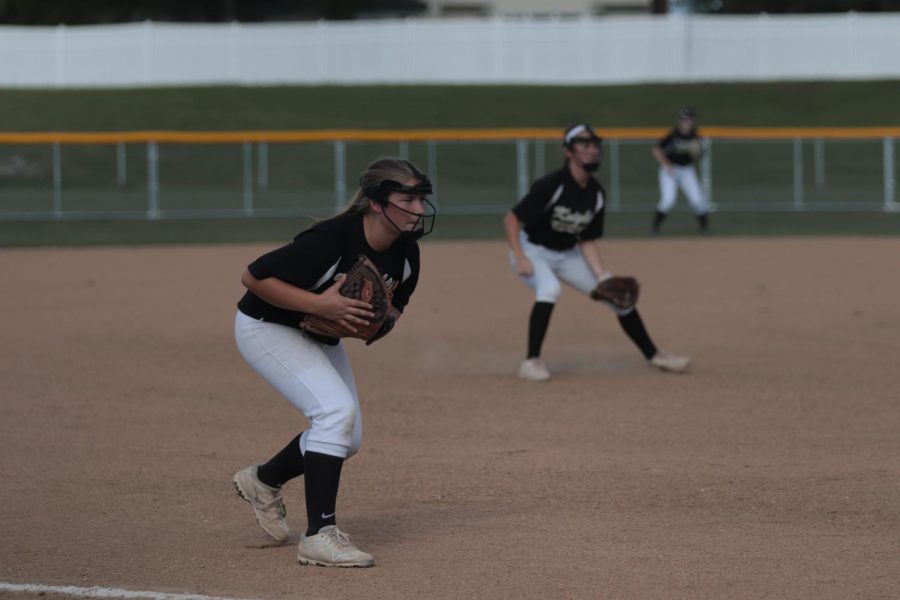 Junior Ella Pardo prepares to pitch in game against the Francis Howell Vikings.

On Sept. 26 the knights varsity softball team will be playing the Holt indians and look to defeat them after losing 11-1 the last time they played them. According to senior Adria Schmidt, the team is a lot closer and plays more as a team this year, and the offense and putting up big numbers against larger teams that the knights have struggled to defeat in the past has been the team’s biggest improvement this season.

Last were the knights were very young and are  weren’t really sure how to play together at the varsity level which made the season a little bit tough, but many of those players such as junior Lucy St. John sowed a lot of promise for the future that year and this year St. John and many of those other girls have been stepping up and just working well at improving as a whole, and this year the knights have some really young players just like last year but have been getting much more comfortable on varsity and starting to really shine in the softball program.

“I think one of our biggest strengths is we definitely are a team full of athletes we all work hard at our sport and our positions I just think one of our weaknesses is kind of playing well together and knowing each others certain strengths as a team,” St. John said. “At the beginning of the season I think a lot of the girls were just very nervous to be playing at that level I think seeing how confident some of the girls are some of the younger girls are starting to realize they can do it and everyone’s starting to piece it together.”

Overall, the knights have gotten better throughout the season as a team, and have mainly been focusing on playing better against Holt than they did their previous game which didn’t go so well. They look to get their pitching under control, keep making plays, and just stay strong against Holt and to have a good season.

“We’ve been having trouble fielding but the last few games we’ve cut down on the errors and [have] been hitting the ball a lot better,” assistant coach Jesse Stewart said. “We’ve been struggling some but we [have] played a lot better than we did early in the year, so [we’re] starting to go in the right direction.”