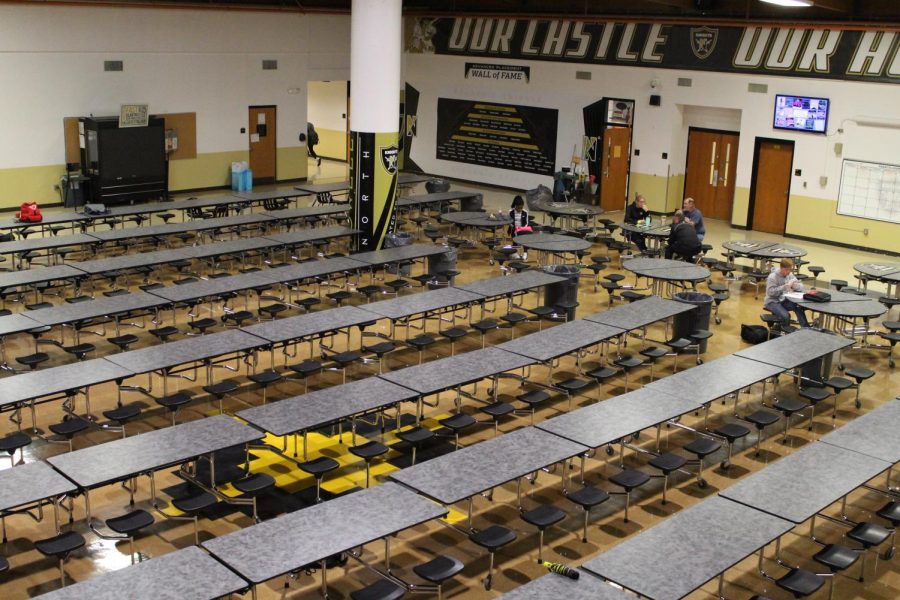 FHN faculty and students eat in the lunchroom every day for lunch. Lunch tables were purchased last year as an improvement to the school. Superintendent Mary Hendricks-Harris and Principal Nathan Hostetler worked together to purchase new tables for the lunchroom. (Photo by Adam Hogan)

FHSD’s superintendent Mary Hendricks-Harris will retire after the 2019-20 school year after working in the district for years. In her final few months, she is pushing for an improvement of facilities in the school district in order to create lasting physical change that can assist in the learning of students through creating a healthy, safe academic environment.

“Our current strategic plan calls for safe, secure, well-maintained and equitable facilities that meet the needs of 21st century learners,” Hendricks-Harris said. “All bond issues, including a new FHN, would be aligned with this goal.”

Earlier this year, the FHSD School Board met to discuss the projects that will go into the improvement of the schools in the district and what it will cost. The session’s agenda contained discussion of fiscal responsibility and school policy reviews before they entered into a work session about the bond issue, which is the facility improvement discussion. There is a current debate on when this issue will run, but Hostetler said rough plans were for either April or November of 2020.

The school board conducted a survey among FHSD employees, parents and people living in the community surrounding the district. Survey questions included questions inquiring about the observed condition of the facilities, the prioritization of certain renovations and the support behind the proposed bond issue.

While none of the people surveyed said that the district’s facilities were in bad condition, 12.90% said they were in poor condition, 48.39% said it was in average condition, and 38.71% said they were in good condition. In the end, facilities could be improved in order to contribute to the improved learning environment. According to head principal Nathan Hostetler, the main concern at FHN is the messy HVAC systems and leaks due to roofing problems, and the rifts between the roof panels.

“We are the oldest building, so a lot of our stuff is beginning to age,” Hostetler said. “We have approximately 50,000 fewer square feet than the other two [FHSD high schools]. And honestly, the HVAC and roofing are going to be significant issues moving forward.”

53.33% of people surveyed said they would strongly support the bond issue if it was $250 million and resulted in no tax increase. No one said they would strongly oppose. A common theme among responses on why the bond issue should be supported was that the facilities FHSD currently works with are outdated and need innovation. Many responses stress the necessity of updates. Building envelope, utilities, and updates were considered highest priority according to the survey, while safety systems were runner up.

Of the proposed $250 million, current improvements to FHSD facilities to satisfy these priorities would cost approximately $66,840,000. Elementary schools will cost the most money for the district, mainly requiring HVAC modernization and exterior improvements, while the minor updates in the high school category would cost the least due to a smaller amount of schools, aside from the cost of building a new building for FHN.

For some time now, talk has gone around about the creation of a new FHN to replace the current one, and this is estimated to become a reality within the next three to four years, and will be built close to Henderson Elementary School. This project is high on the School Board’s priority list, according to Hostetler. The pre-construction cost estimate is $86,350,000. The building of a new FHN has raised concern among the people responding to the school board’s survey, mentioning that the school may need a remodel but do not see it necessary to build an entirely new facility.

“If North is going to be in the same place in terms of physical plant as the other two buildings, then this one really does need to be replaced,” Hostetler said. “It really is time for this. It’s not like the building’s falling down around us, but it’s time.”