The Future of Being a Nerd [Opinion] 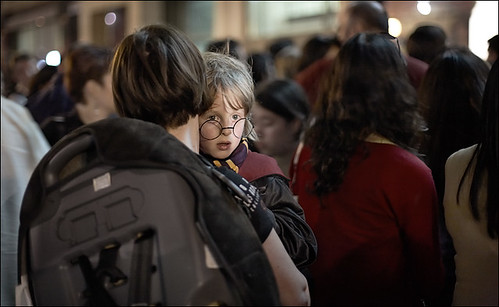 A child waits in line during a Harry Potter event.

An 8-sided die rolls out onto the board. As it comes to a stop, 5 sets of eyes watch it anxiously, waiting to see what number it lands on. As it lands, some players breathe sighs of relief, while others throw up their hands in frustration. The next move will be a complex one.

When one used to think of the word “nerd”, the first thing to come to mind was a scene straight out of the 80s (like the one described above), with teenagers sitting around a table playing Dungeons and Dragons. The word “nerd”, according to Merriam-Webster, started being used in its current context around 1951. The definition of it, however, has remained largely unchanged since then. The pop culture term is currently defined by the aforementioned dictionary as “an unstylish, unattractive, or socially inept person: especially one slavishly devoted to intellectual or academic pursuits.”

Those intellectual pursuits, and the “nerds” who are devoted to them, remain ever-changing. The question is: where do they go next?

Up to the early 2000s, the term “nerd” was used to define a person who stuck out like a sore thumb in social situations. The stereotypical glasses-wearing, video-game-adoring person of the 90s. Then, the magic of social media hit the masses. Harry Potter, Marvel movies, a brand-new Doctor Who, and the emergence of a new generation enamored by comic books and fantasy novels redefined what a nerd could be. All of a sudden, it was in vogue to be a nerd. Proudly proclaiming their nerd status, a new legion of nerds emerged. On laptop stickers, on backpack patches, on figurines, on t-shirts, their passion for various “nerdy” pursuits became known to the world.

This is the place we have come to in the present day. And, from here, it’s pretty clear to see where we go next. In an all-new, more interconnected world defined a lot by socialization, the next evolution of the formerly awkward nerd is a social one. When being public about so-called “nerdiness” has become the norm, being social about it (or spreading the word about nerdy pursuits to other people) is the next logical step. Although this newest evolution of nerdiness is definitionally the antithesis to what a nerd was originally meant to be, it’s a welcome step in the right direction. Instead of ostracism, nerd culture (in and of itself) has been met, increasingly, with open arms. That acceptance, with an utter lack of judgement, is a beautiful thing. More than ever, it’s a wonderful time to be a nerd.