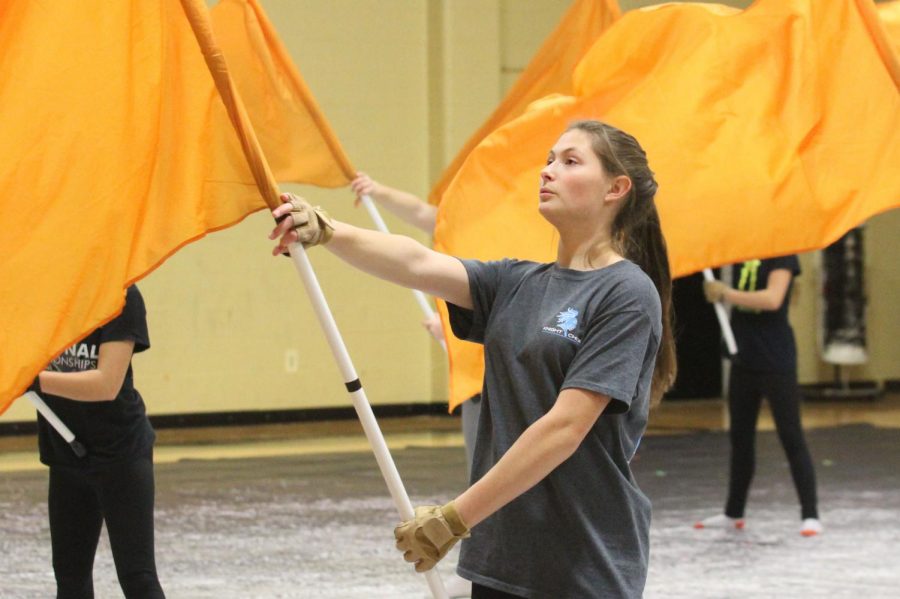 Standing tall, junior Lily Karase holds out her flag preparing to spin it during winter guard practice. Many new changes occurred this year, such as there is only one team, getting rid of the division between JV and Varsity. Two returning coaches are preparing the show this year. (Photo by Avery Witherbee)

As the cold descends upon St. Charles, FHN’s winter guard is not discouraged as they warm-up for their season.

This year the coaches have decided on the theme: the aftermath of a storm. The show will start off gloomy and then it will move to a brighter show with rainbows being used as a design. Winter guard’s costumes will include a raincoat and dresses.

“I like the concept of the show,” sophomore Abigail Schmitt said. “I like that it starts out in a huge storm and then everything clears up and it’s all pretty and colorful. I like that the two parts of the show are very different and at the beginning, it’s really gray and sad, then it changes into colorful and happy.”

Several members of the fall color guard returned to perform in winter guard in the new season. Although the two can be confused, winter guard allows the team to perform more intricate shows because they don’t have to share the stage with band members like color guard has to.

“Since [color guard is] held outdoors, we have to learn to spin with all the elements like the wind and performing up into the sun and that affects the way that we spin and how well we perform,” Schmitt said. “During winter there is no wind or sun to look into and that kind of helps with spinning [because] you know there is nothing affecting the way your equipment moves.”

Coach staffing changed between the end of color guard and the beginning of winter guard. The new coaches allowed for performers to come together and feel more united as a team

“I think we are more like a team,” senior Jenna Brown said. “During fall we really struggled to connect but now that we have staff that we know and we are comfortable with, I think we will work together very well.”