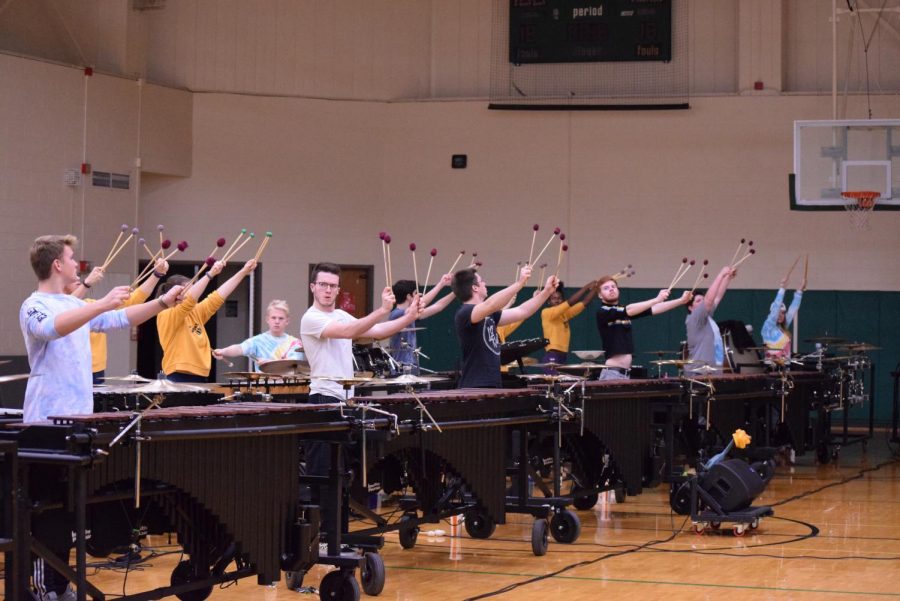 During the winter, Freedom took advantage of schools being on break to host their Christmas Camp for members to be able to have extra practice time while off. The Freedom front ensemble and battery had themed days such as dress like a staff member and twin day. The spirit day kept the mood playful and fun during long hours of practicing. (Photo Submitted)

The auditions started in September and final decisions were made in October. In a matter of weeks, two FHN students went from a being a part of a small marching band ensemble to a World-class drumline. Sophomore Tanner Rogers and senior Sarah Arnold spend almost every weekend in the gym of Orchard Farm, practicing for long hours with the Freedom Percussion Drumline.

Freedom Percussion is a dream turned reality founded in 2009 by Michael Davis. Freedom Percussion hosts a group of mentors teaching the fundamentals and principles of percussion and visual design to young students in order to compete in an arena with numerous indoor percussion ensembles. Freedom is a St. Louis WGI Independent World performing arts drumline with numerous members each year that audition for a spot among so many talented musicians.

“Freedom is an environment where everyone cares and is consistently pushing to be better,” Arnold said. “It can be super draining but with it, I’ve gained a new love for music that I thought I was losing.”

But before all that, there were auditions. Arnold and Rogers attended each audition with the hopes of making it into such a high achieving group. When tryouts are finished and the directors make their final decisions the members are offered a contract stating for them to attend every practice, follow through with payments, and commit graciously to the ensemble.

”Auditioning was a lot to take in at first, especially coming from a marching band ensemble,” Rogers said. “But once we officially got music, the pressure felt more intense and the need to to learn quickly was overwhelming.”

Both first-year members, Arnold and Rogers have caught on fast with the feel of their show, Are The Judges Ready. The theme takes on the role of the internal and external feeling of judgment and how we all judge people. The group of 36 skilled percussionists will take the floor on Saturday, Feb. 1 for the first reveal of their 2020 show.

“I’m definitely nervous because I’ve never done this with Freedom before,” Arnold said. “But since we are such a well known and respected group, it raises standards a lot and I want to do my best to give the performance my all.”