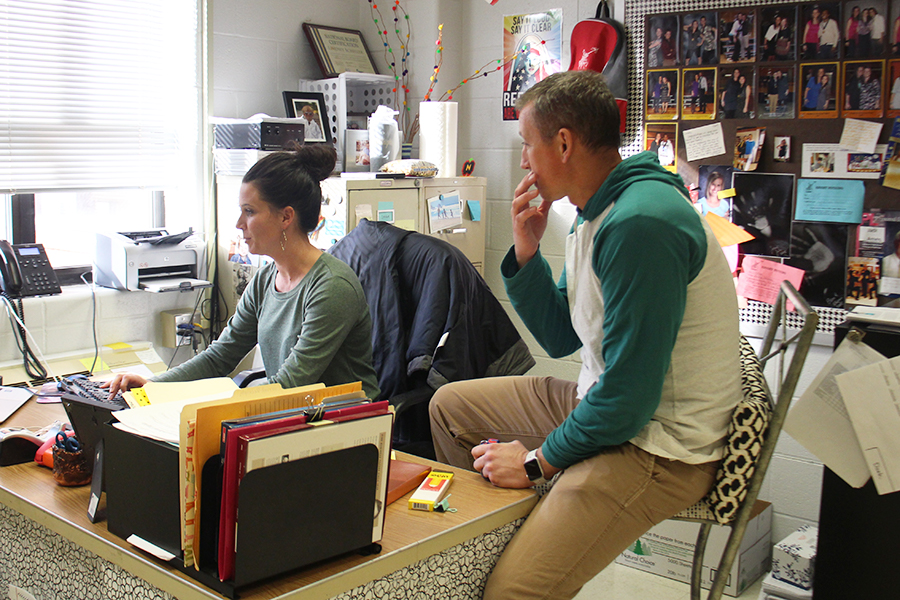 By Amanda Hasenbeck and Parker Kilen

Lindsey Scheller and Larry Scheller have been married for 15 years, almost 16 now, and have known each other since they were 18 years old. Now they work in the same building, and according to both of them it can be pretty tough but also really cool.

“We get to see each other when we want to, we can ride to school every once in a while if we don’t have anything afterwards, we communicate a little bit easier so that’s fun,” Larry said.

According to Lindsey, there are some pros and cons to working in the same building, but they both enjoy working together very much.

“We know a lot of the same people, we have a lot of things to talk about, when social things happen like when we have any kind of staff outings then we’re just at the same place at the same time so that feels really fun,” Lindsey said. “I would say that the main thing that comes to mind as a con is that since we have kids any time that we have something that we have to be here for, in the evening the two of us always have it together so we always have to find a babysitter for things like parent teacher conferences or open house night and things like that because we always have the same responsibilities.”

Overall, students really like the Schellers and according to senior Hailey Jenkins, who has had them both in her high school career, they’re both completely different people, Larry is more outgoing and Lindsey is more of a sweet heart. For Jenkins, it’s fun having both of them and realizing that they’re two different people inside and out, but they both have a very unique and happy class.

“They’re both nice,” Jenkins said. “I feel like Mr. Scheller isn’t afraid to tell you what he thinks and Mrs. Scheller can still speak her mind but still filters it a little bit better for her students.”