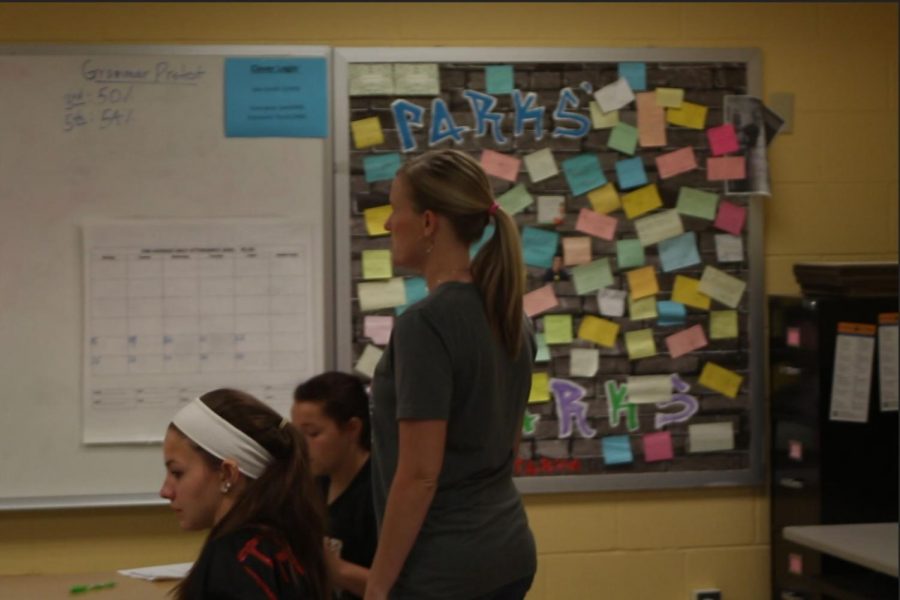 English teacher Shelly Parks works with her students in class.

Lately English teacher Shelly Parks, who won Missouri state teacher of the year last year, has been missing several school days while she’s been working in Washington D.C. Parks has been busy there but will be returning to FHN next year.

“I’ve done a lot of speeches, workshops, job fairs, recruiting teachers, serving committees, and then the big national events like the college football national championship, went to the White House, and went to google headquarters and was trained there,” Parks said. “I’m obviously not teaching kids here and that’s different but I’m doing work for the district, gone to do [a lot of work] getting materials ready for presentations, and I’m running committees, so I’m doing a ton of work but it’s just different kind of work that when I’m in the classroom.”

Senior Amelia Primeau developed a very strong bond with Parks after doing student council with her, and is very excited for her to come back next school year.

“I actually got invited as one the four students that got invited to go to her actual ceremony which happened in Jefferson City and so I went and watched her get her award and stuff like that,” Primeau said.

According to fellow english teacher Lindsey Scheller, who is good friends with Parks, Parks will be back full time next school year. According to Scheller, she misses Parks very much and can’t wait for her to come back.

“I’m not sure what she’ll do [when she gets back],” Scheller said. “I know she runs several different programs here, she’s still our department chair, and she’s still is a student council sponsor so there still is a lot of stuff she is doing and I know the district has her doing a lot of different things.”