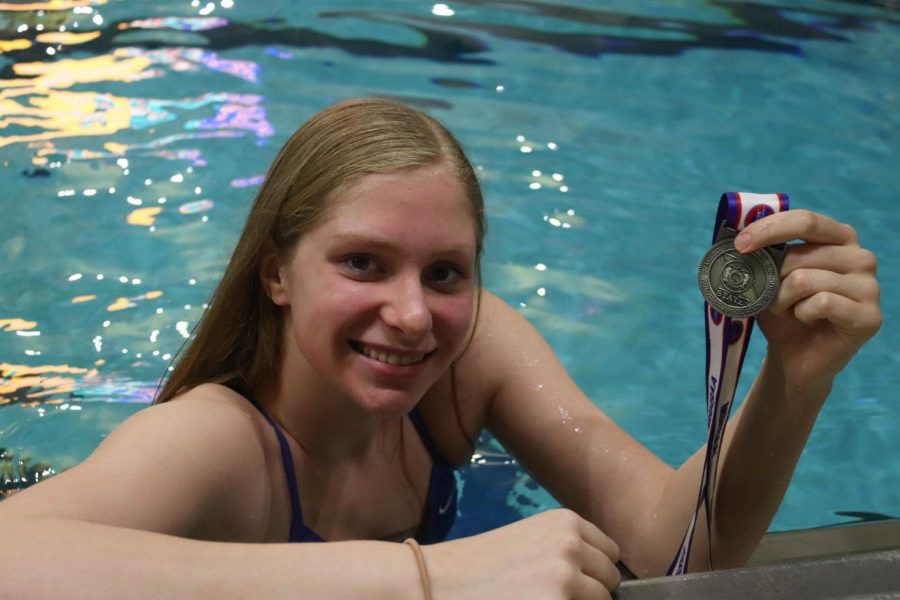 A nine-year-old girl watches her older brother in the pool at the YMCA after being dragged to one of his swim lessons and she’s intrigued. She wants to participate in a sport with him, so she takes up swimming and later joins the Rec-Plex Sharks swim team. Fast forward eight years and senior Joanna Dohrman has broken six school records on the FHN swim team. She has practices eight times a week for the club team and school team, taking place at the wake of dawn and in the dark of night. She has made state cuts for four individual events, qualified for Speedo Junior Nationals and continues striving to break her own records and achieve new goals throughout her future.

“I feel like I’ve exceeded a lot of my goals,” Joanna said. “For my club swimming, we go to sectionals and for a long time it was my goal to do all of that. Then, I ended up being able to go to a Junior Nationals meet. It’s exciting, but I never imagined I’d be able to go to that.”

Joanna swam on FHN’s team her freshman and sophomore year but took a break junior year to have more time for school and club swim. However, this year she is taking on multiple AP courses and year-round club swim, as well as rejoining the FHN swim team for her final high school season.

She ends up balancing school with club practices from 6 p.m. to 8 p.m. from Monday through Friday. Additionally, on Tuesdays and Thursdays, she wakes up early to attend practice before the school day. After the evening club practices, she drives to the Rec-Plex for school swim practices from 8 p.m. to 10 p.m., many times amounting to three and a half hours of swimming a day.

“I think it’s taught [Joanna] to really be organized and schedule her time,” Joanna’s mother, Rebecca Dohrman, said. “She’s had to make goals for herself and prioritize what she needs to do. She’s had to give up some things she liked because she wanted to keep swimming, so it made her have to make choices to give other things up. There is a lot of decision making that goes on with her packed schedule.”

Despite having multiple commitments that require intense devotion, Joanna stays positive and perseveres, constantly pushing to achieve her goals and making new ones when she breaks records.

“It’s all about having ideas in her head of what [Joanna] wants to achieve next,” Rebecca said. “She’ll have times in her head of ‘This is the time that I need to qualify for this, or to be in the top eight, or to break this record.’ When she was a freshman, she looked at that FHN record board and she knew she wanted to see how many of those she could break and she’s chipped away at quite a few of them.”

In this year’s state finals, which will take place on Feb. 22, Joanna plans on swimming the 500 meter free, her best event, as well as the 200 meter free. With her endurance as a distance swimmer, her best club team event is the mile. The FHN swim team currently has the consideration cut for state and hopes to make the 400 meter relay in state.

“[Joanna]’s definitely our strongest swimmer without a doubt,” senior and teammate Emilee Statzer said. “Number one- but she doesn’t act like it, she doesn’t have the superiority complex. She’s so nice about absolutely everything. She’s a fantastic teammate. I can always count on her to be standing at the end of my lane, cheering on me, even if I’m doing really bad. She’s very encouraging.”

Her long journey in competitive swimming doesn’t stop at high school. While researching colleges with swim teams, she found John Hopkins University in Baltimore and reached out to the school. After she took the initiative, the swim coach for John Hopkins University flew to St. Louis to visit Joanna and her parents. Later, she was able to tour the campus and experience what her future academic career would hold before attending.

“It was just special because I felt like [the university] really wanted me on the team,” Joanna said. “That was a big part and the visit was super cool. I stayed in an apartment with three juniors on the swim team and they all live together and it’s cool to see how they sit down and do their homework together. [The visit] was personal because you were with people that might be your future teammates and the other recruits. I met four people who are going to be swimming with me next year, so I already know a few people going in, which is exciting.”

The prestigious school, with an acceptance rate of 13%, doesn’t offer athletic scholarships, but they assisted her application to help the process go smoother so she could attend.

“It helped me a lot for swim because they assisted my applications,” Joanna said. “[John Hopkins University] is really hard to get into, it’s a really good school, so it’s exciting. Basically the coach is like ‘If you commit, I will assist your application.’ That took a lot of stress off.”

Her family loves watching Joanna swim. They attend every swim meet they can and are currently figuring out how they will attend her college meets halfway across the country, as John Hopkins University is a 14 hour drive from St. Louis. Her mother believes swimming has increased Joanna’s determination and persistence towards her goals.

“[Joanna] was 10 or 11 and she saw that she could put her mind to something and achieve it,” Rebecca said. “It might take a really long time or it might take a lot of hard work, but it was doable. I think now she thinks, ‘Okay, I can set other goals for myself in my school work, or my academics or for my career and I can work toward those things and it might take a while, but I can get there.’”