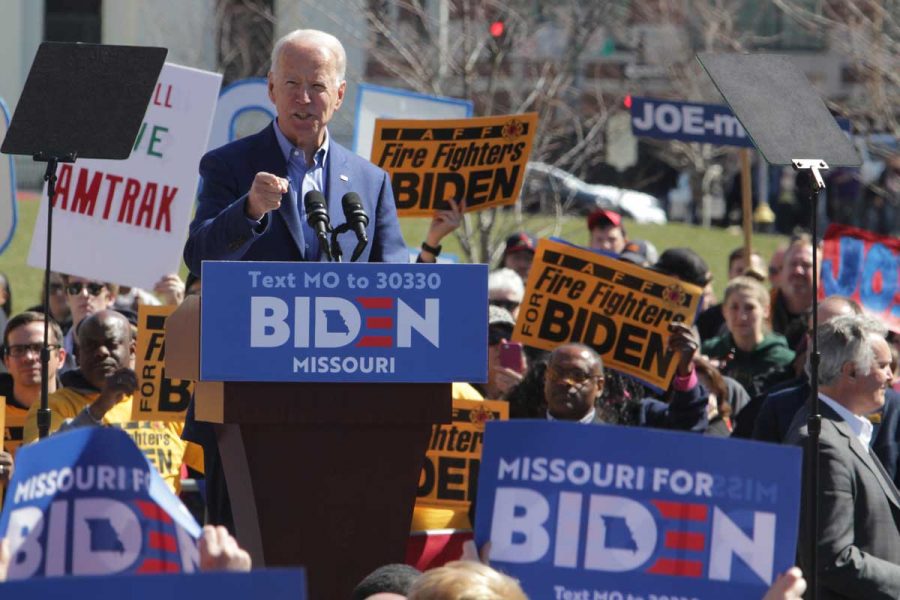 Biden addressed a wide variety of issues he plans to tackle and policies to instate if elected, including affordable healthcare, increased funding for medical research, equal opportunity education and the student debt crisis. Climate change was also a big talking point for Biden.

During his speech, Biden promised the crowd “On day one I will rejoin the agreement”, in reference to the Paris Climate Agreement. This came after he criticized President Donald Trump for withdrawing from the international climate agreement.

The rally was announced shortly after Super Tuesday results left only Biden and Senator Bernie Sanders as front runners for the democratic nomination in the 2020 presidential election, leaving many Missouri democratic voters with a choice to make.

The Missouri Democratic Primary will take place March 10. For many young people at the rally, the upcoming primary will be their first chance to participate in an election. Some first time voters came to hear more from Biden before deciding their vote, while others came to show their existing support.

“He ran with Obama which I was in full support of and as a young person I really want a president who can lead our country and tell the rest of the world that America still has good people and good people in high places,” Elise Griffin, first time voter and high school senior, said.

Other attendees shared what they hope to see from a Biden presidency. For Rachell Ragan, it’s a female vice president and promises to work on healthcare and the environment. This was Ragan’s first rally.

“I’ve never been political until this,” Ragan said. “I vote every year but I didn’t go to anything political, I just trusted that whoever was elected wouldn’t try to destroy the entire country so I didn’t pay much attention to it. But now, I’m looking.”

Following the rally, Biden traveled to Kansas City MO to speak at an event at the World War I Museum and Memorial.