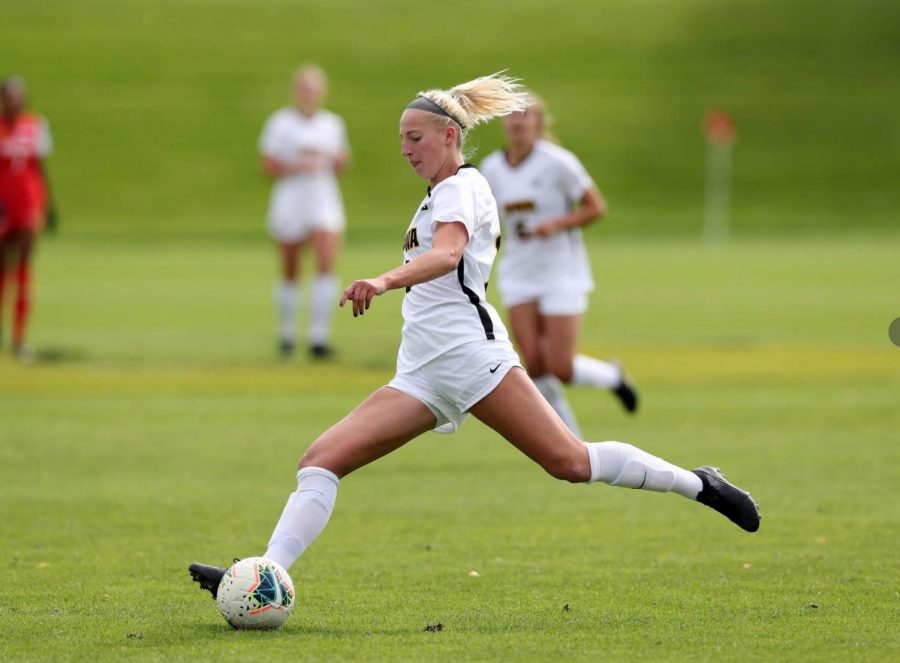 1. How do you feel about the soccer season getting cancelled due to covid-19?
It’s absolutely disappointing for all of us, so our main season is in the fall and our main season is in the fall and our prep for the season is in the spring so it’s a really critical time period for all of us to really build up our fitness, build up strategies as a team, realine formation and then we have pre games that we play, and we had to play 2 of them and the rest of the 3 got cancelled so it’s a really disappointing just because this is a really fundamental time for our team and team growth and now we’re all having to work on stuff as individuals.
2. Did you see the pandemic coming?
It all happened so quickly, I remember we were monitoring the situation really closely, Iowa officially called off school March 10th and that we were going to try to go back April 3rd for school and then the hope was athletics were going to reopen, so then a little bit later Iowa said that they were done for the semester but there’s still hope that athletics could still return and start working out as a team on April 5th however a week ago it got announced that we’re done for the rest of the semester for athletics as well, so I remember about a week before Iowa announced it, Ivy League announced they cancelled their spring season and that stuff was happening and so we were monitoring it and at that point I knew it was inevitable but we were hoping it wasn’t actually going to happen.
3. Does covid-19 affect any of the soccer positions in particular with training?
The biggest thing is fitness so that’s been a really hard part for me as running on my own, going back to working out, I was working out at North for awhile till they locked it up, being creative in how I get my fitness in [and] how I get my soccer tensions in, my mom and I have been up at tennis courts practicing soccer, just doing whatever we can to make sure I can stay at the top level of my game that I can.
4. What are your goals for soccer going into the season?
We had an incredible fall season last year, we broke many school records, we got 15 wins in the regular season which was a school record, and we made it to the NCAA tournament for the 2nd time in school history. It was an incredible season, so to build off of that we have a really young team that graduated 15 seniors I think, and it was for both the NCAA so the hope is to really go back to our root, build up what our program wants to be, I really hope to make a bigger impact even than I did last year and I had a really strong impact last year with 21 starts and I started every game of the season, and so really just doing whatever we can to build up the Iowa soccer program.
5. How do you yourself plan to workout and be prepared for the fall soccer season?
The biggest thing is our coaches have been great, they sent us a bunch of stuff through a google doc of these are the runs you need to do today, these are the weightliftings you need to do today, and so my parents have been more supportive than ever of going back and shouting my long balls and throwing balls at me so I can receive them and work on soccer, the weird thing about this whole situation is obviously it’s super frustrating that I’m not with my team right now, it’s kind of like I’m back to my roots of soccer, if feel like I’m a middle schooler again and there’s no pressure in the world, it’s just me and the ball everyday and I really like refound my love for soccer and I love going out and practicing,