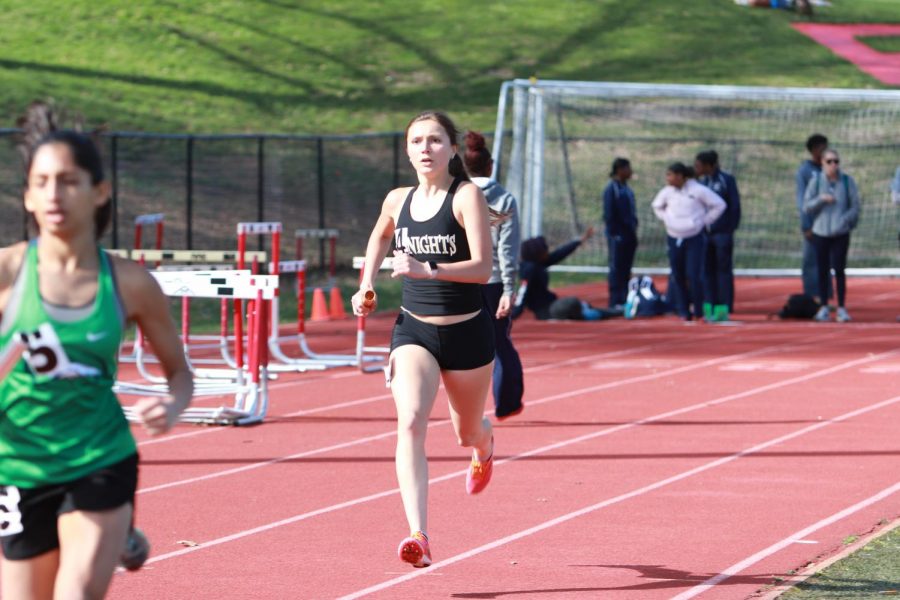 Senior Mackenzie Pugh runs her leg in the 4x800 race at the Henle Holmes Invitational. Pugh will be running cross country and track at SEMO.

“It was really dramatic because at first we didn’t think this was going to be a big deal, and then all of a sudden my coach is like “we have a mandatory meeting at 6 pm tonight, I want to talk to you guys” which was really weird,” Mackenzie said. “We went in my whole track team met up at our little track house area, and they told us the news that even though school wasn’t cancelled, the Ohio valley conference already called that it was going to be cancelled, but we knew that before school was going to get cancelled, and it was just a really big shock and I kind of remember just my whole team just kind of walking out of the whole building after saying goodbye to our coach and everything, and just standing in a circle and coming to realize that we aren’t gonna race with each other again for at least 6 months and some of our seniors we aren’t gonna race with them ever again and it’s definitely just shocking and kind of surreal.”

According to Mackenzie’s mom, Dawn Pugh, she and everyone else in Mackenzie’s family were really looking forward to that season, they went to every single meet in the fall for cross country and the winter for indoor track, and just had a great time watching her and they were really looking forward to the spring season and would never have imagined the whole thing would get cancelled especially for such a terrible reason, however they looked on the bright side and are very happy that they can now be together as a family and that Mackenzie can still workout at home, which she does.

“Mackenzie still sticks to her workouts that her coach has developed for her, so she’s ran many many miles everyday either inside or outside, she uses a treadmill if she has to but running safely, sticking with her plan looking forward to when the next season can start and we hope that’s soon but we hope realistically that we can keep an open mind and see what happen,” Dawn said. “We just hope to see what we’ve seen in the past, her hard work and determination. She’s just a joy to watch, she’s always pushing herself and working as hard as she can, and getting better, and just being an impressive and dedicated person, and really dedicated athlete.”

Overall, despite Pugh’s outdoor track and field season getting cancelled, Pugh still works out at home and is already setting high goals and expectations for herself. Things turned out to be really weird for Mackenzie, her teammates, and their coach, l because their coach had already given them a whole training schedule for the rest of track season until it got cancelled the team had to redo all of their training and workout schedules, and Mackenzie and her whole cross country and track team are now working on holding their endurance and not getting burnt out since they don’t compete again till August and September the team is working very hard on just staying strong and staying healthy.

“I would definitely say that my goal each year is always to PR because that shows that no matter what you place, your always progressing if you can beat your own time last year I went to conference and to regionals, and I got to compete there so I’d really like to do that again I would like to score in the top 150 girls at regional I think that would be really awesome but we’ll see what happens,” Mackenzie said. “For track I would say this year I was really excited because I was going be able to do the steeplechase which I’ve only done that once in high school so I would like to do that again. So yeah, I would just say have a successful race at the steeplechase would be my goal for track I would like to score at conference if I can but we’ll see.”