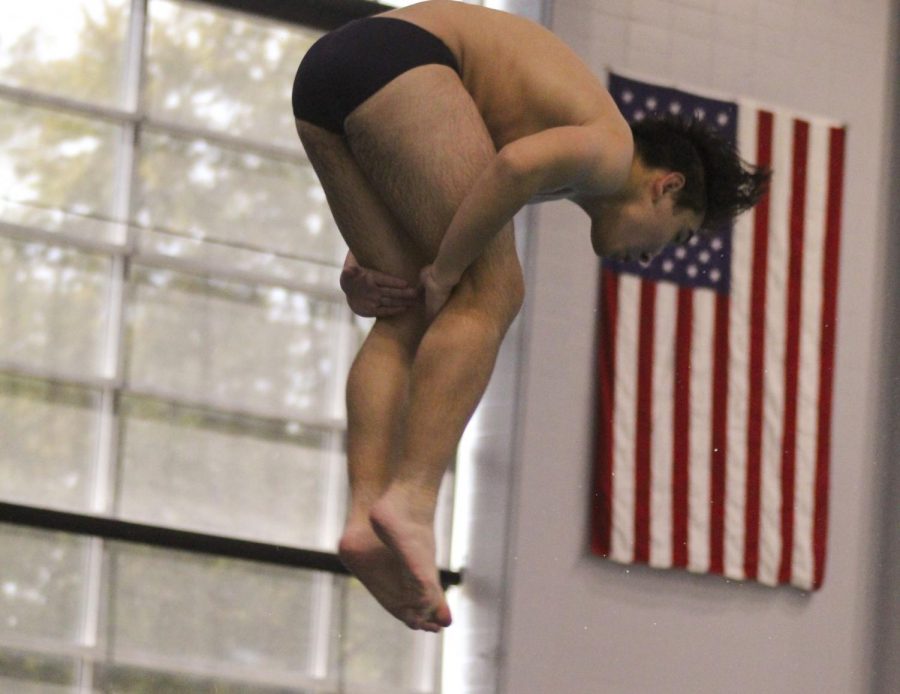 On Sept. 29, Logan Shelfaut dives at a meet at the Rec Plex vs. Fort Zumwalt South.

On Thursday, Oct. 1, junior Logan Shelfaut shattered the six dive record at the Rec Plex during a meet against Fort Zumwalt North and Washington High School. This means that he competed in six dives in one meet and his score for the six dives combined exceeded the previous record holder’s.

“I was pretty excited, the record was set pretty high by the previous diver,” Shelfaut said.

The former record holder was Pete Lucido, who graduated FHN in 2017. Lucido’s record was 351, and Shelfault beat it by more than 20 points, scoring a 374.

Shelfaut has been swimming since age 8. Prior to swimming for FHN, he swam for the Rec Plex team, The Sharks. This accomplishment comes after being the state champion twice for diving in his freshman and sophomore years.

Shelfault also swims in events during swim meets such as the 100 free relay and 200 free relay. Before his freshman year, there weren’t even enough swimmers to make a team. Shelfaut has remained a constant on the team since the start of his high school career.

“I went to practice every night and did my dives over and over,” he said.

His teammates were there to cheer him on, as well as his FHN coach of two years, Dave Nielsen.

“His accomplishment was a lot of work over the last two years,” Nielsen said. “As a coach, it was very rewarding, for all the effort he put in trying new dives and smacking the water.”

Moving forward in the season, Shelfaut hopes to continue to do his best and make it to state for the third year in a row.

“The biggest thing is him staying humble, being able to roll with the ups and downs, more or less perfect the dives we are working on, get to state 100% committed to the dive list. Hopefully, he becomes a three-time state champion,” Nielsen said.