Junior Mya Walker Advocates For The Equality Of Black Lives 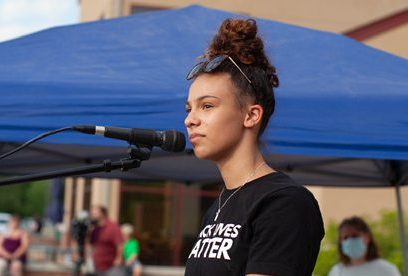 Mya Walker stands in front of hundreds of people as she gives her speech at the Calvary Church.

People can be passionate about multiple things. Art, music, space, fashion and more. Junior Mya Walker decided to share her passion for the advocacy of black lives by giving a speech about her experiences at the Black Lives Matter march for equality held by some members of the FHSD community on June 16.

Throughout her speech, Mya talked about what she went through as early as her childhood years. Before even thinking about if she should share these experiences with people she barely knew, FHN teacher Jani Wilkens reached out to her to see if she’d be comfortable with sharing her story.

“She knew I was very passionate about these issues, and that I had a lot of stuff I wanted to say and needed to be heard,” Mya said. “So she encouraged me and invited me to speak at the protest.”

Mya admits that talking about these things is never easy but realizes they need to be talked about so it can be tackled head on. One of the experiences that got her thinking from an early age was when she was told to go back to Africa.

“I was just confused cause I’ve never even been to Africa,” Mya said. “People really don’t understand the weight their words carry and I think because of that people need to be held accountable for what they say even if it’s uncomfortable and hard.”

Mya’s activism first started with discussing mental health. Starting her freshman year, she realized that “it’s okay to not be okay,” which sparked her growing passion to help people and stand up for them even if no one else will.

“Not everything is sunshine and rainbows, which is why I started reading about different subjects about the topic and it really opened my eyes,” Mya said. “If I didn’t speak up about it then who would? If I wanna see a change, then I have to speak up.”

Along with mental health, Mya is also very concerned with the violence in this country. Police brutality has been an ongoing racial discussion in the United States recently. She has seen victims on the news and social media almost every day and because of this, Mya is no stranger to these injustices she sees and hears.

“I have a hard time wrapping my head around how people go to sleep at night when they disregard people’s life and livelihood. It’ll truly always be a mystery to me,” Mya said.

Mya continues to advocate for racial justice and mental health awareness, with the support of her mother, Michelle Walker, as well as friends.

“She shouldn’t have had to go through those things as a kid but all in all Mya has educated herself and learned about the facts,” Michelle said. “She’s very good at helping people see a different perspective.”