Athlete of the Week: Cole Hopper Makes an Impact on the Boys Volleyball Team 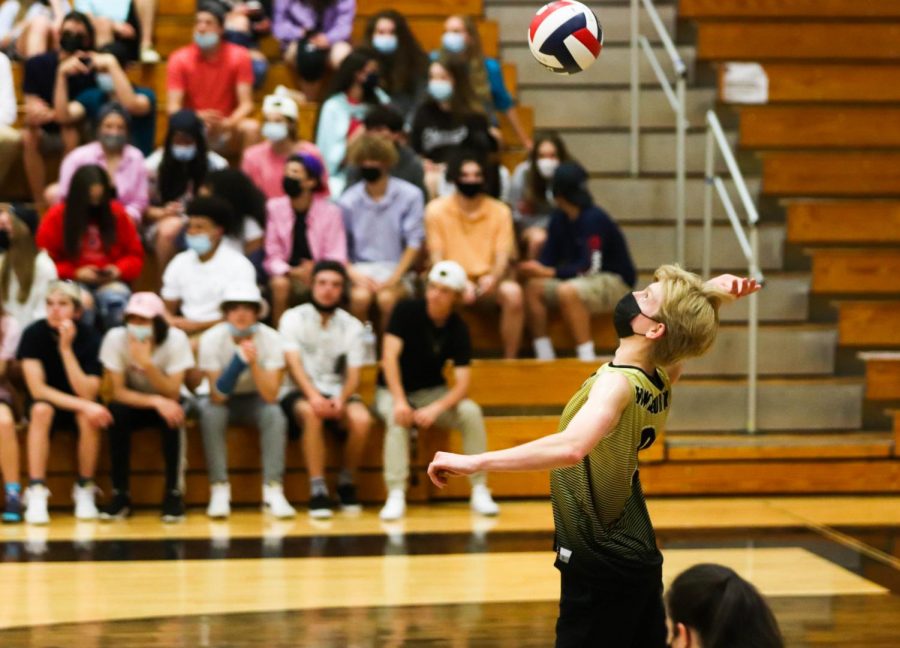 Senior Cole Hopper jumps to hit the volleyball during a game

The boys volleyball team was very successful this year, and senior Cole Hopper had a big part in it. At the beginning of the season, a couple of his teammates got quarantined and Hopper began to make his mark. Hopper was needed to fill the position of one of the quarantined players. Such a sudden change can be a large undertaking, but according to his coach, Robin Yuede, he handled it well.

“When most players take on a new position, I am just looking for a body to fill the role,” Yuede said. “Cole was different. He worked hard to master his new position and exceeded all expectations.”

Hopper played middle hitter for most of the season, and was very successful. He had 56 blocks in 80 games. Hopper’s work did not go unnoticed, Junior Grogan Kraus was also impressed with Hopper’s play.

“He played fantastic throughout his time in that position,” Kraus said.

Hopper’s goal for this season was to make the most of his senior year despite COVID-19 causing setbacks. As shown by their 20-8 record, Hopper and his teammates certainly made the most of the season they had. After beating Vianney in the district championship and then competing in sectionals, the team gave their all and had the best season in FHN history.

Of course, every good team has a good coach behind it. Hopper has been groomed into the player he is by his coach, Yuede.

“Since freshman year, she has always been supportive of me and excited to watch me grow as a player,” Hopper said. “She has always brought high energy to keep me going through tough games and practices, and her determination to win motivated me to work harder to make it happen.”

The hard work on both Yuede and Hopper’s part built a strong team player and strong athlete. Hopper appreciates all of his teammates and will carry on his many memories from all four years of playing at FHN. To end a career on such a great season is something that every athlete strives for.

“I think at the end of the day, I couldn’t have asked for a better team or a better season,” Hopper said.

To nominate an athlete to be recognized as Athlete of the Week, please fill out this form: tinyurl.com/fhnathlete