By On Behalf of the Editorial Staff 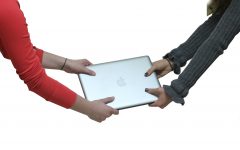 Editorial: Computers for All Staff should not be allowed firearms - North Star Take Editorial Over the summer, the vote on FHSD’s Proposition Y took place in hopes to raise the district’s funding to avoid budget cuts by raising a property tax. The people of St. Charles County took to the polls on Aug. 4, deciding on an overwhelming “no” on Prop Y.

Out of the estimated 243,000 registered voters of St. Charles County, only 19,728 voted on the issue of Prop Y. That accounts for only about 12.3 percent of the registered voters in the county. While that low number may seem shocking, the most shocking thing is that, according to FHN Head Principal Andy Downs, the 12 percent of voters that voted on Prop Y is actually an increase in the number of voters compared to other local issues that the community has voted on. This lack of participation is a growing problem in modern society, as fewer and fewer people participate in government on the local, state and national levels.

So, why is that number so low? Why aren’t people going to the polls on election day? According to Missouri state Representative Bryan Spencer, there is a variety of different reasons why people don’t go out to vote, all the way from not having enough time to not even caring. So the question has to be asked, why should people be getting out to vote?

Maybe some people don’t vote because they just don’t care. They don’t care who will be making the decisions for their community, their state, or their country. Maybe some people take it as a joke and that’s why Donald Trump is leading in all of the Republican polls. Maybe people are too lazy to get up and go to the polls to decide what happens in their community, their state, or their country. Maybe, just maybe, it’s time people start getting involved in the elections on all levels, from the local community all the way to Washington D.C.

You may ask yourself if your vote even matters. You may be asking yourself “does my vote even count for anything?” The simple answer to that question is yes. There have been a number of elections that have come down to an extremely small number of votes, such as the 1960 presidential vote in Hawaii, in which the voters decided by a margin of only 115 votes that saw John F. Kennedy take the state over Richard Nixon. Also, in the 1916 presidential election, Woodrow Wilson won the state of New Hampshire over Charles Evans Hughes by a margin of 56 votes, or 0.0628317 percent, to win the 13 electoral points that would prove to be pivotal in his run for reelection. So before you tell yourself that your vote doesn’t matter, remember that history proves you wrong on a large amount of occasions.

Maybe people don’t vote because they don’t have time due to the short hours that voting booths are left open. This is a growing problem that we as a community need to work towards getting fixed, as polls remain open only for a few hours on Election Day. There needs to be a change here so more people have time so they can get involved in the community, as said by FHN government teacher William Crow. The hours that polls are open need to be increased, not only on a local level, but on the state and national levels as well. Would this have changed the outcome of Prop Y?  Who knows, maybe more people that supported the proposition could have made it to the voting booths and the district wouldn’t be facing the massive cuts and uncertainty that we face now.

Whatever the reason may be, the number of people that vote on issues needs to be drastically increased. People need to get involved. How, you may ask? By getting educated on the issues that we face as a community, state and nation. By getting educated on the issues, you can then go on to educate others on why they should vote the way that you’re going to vote. Then, on Election Day, go to the polls. Encourage your friends to go to the polls. So, get out there and stay involved. Don’t take democracy for granted, in other places around the world, people are treated like pigs going to slaughter and have no say in the government, which is why you need to get involved.