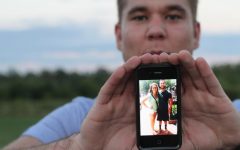 It was just an ordinary day. Well, as ordinary as it can get when you’re walking around with a major heart problem and you’re not even aware of it. When senior Abby Rapplean’s dad, Denny Rapplean, went into urgent care thinking he was suffering Pneumonia, he had no idea his world was about to be turned upside down.

“I was very shocked.” Denny said. “I couldn’t believe it, I thought they were lying to me because I felt perfectly fine.”

When the doctor took his blood pressure, the numbers came out as 180/144. An insanely high number compared to what is considered normal, 120/80. The urgent care doctor informed him that something was seriously wrong, and he could not leave urgent care unless it was in an ambulance. His blood pressure at the time was considered as being in stroke mode. Denny was moved to Barnes-Jewish St.Peters hospital. 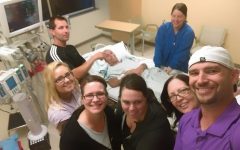 My dad being alive is a miracle. I know he is realizing that he got a second chance at life and that he needs to make the best of it.”

“When I got the text that my dad was being rushed to the hospital,” Abby said. “I was terrified. He told me not to worry or freak out, but I was anyways. I knew it had to be worse than he was telling me because my dad never wants his kids to worry.”

After going through a series of tests, the doctors determined that the problem was with his heart. One of the main arteries was completely blocked, and the other was 90 percent blocked. There was no doubt that Denny would need surgery, but the doctors weren’t sure that his heart was strong enough to undergo it. His mom and sisters flew down from Arizona that night. After a few days of waiting while Denny was on blood thinners, the family finally got some good news. The doctors thought his heart was strong enough, and he was being moved to Missouri Baptist for the surgery.

“When I was told that my dad needed triple bypass surgery,” Abby said. “My heart dropped. All I could think about was losing my dad and how lost I would be without him.”

The doctors took arteries from his legs and wired them around his heart to increase blood flow to the heart. The surgery took about six hours. Meanwhile, family worked on completing a puzzle in the waiting room to pass the time. When the doctors finally came out, they explained that surgery had gone as planned. The only complication that occurred was some internal bleeding. After re-opening the wound, they found that it was a blood clot and were able to remove it. 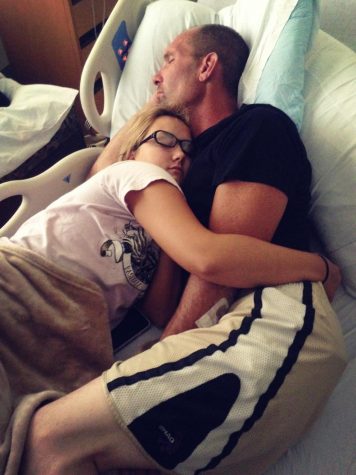 “I was so happy and relieved when I found out he was okay and that they surgery went well.” Abby said. “I was still nervous at the same time because I knew that I had to help make sure he followed all directions at home to make sure no problems occurred.”

Now that Denny was on the mend, he had to make some major life changes. His diet, exercise, daily life, and regular routines would be changed forever. He can no longer lift things over 15 pounds, and he’s limited to working four hours at a time. His mom, Diane Rapplean, stayed with him through the most crucial part of recovery. This offered valuable bonding time for the two since they normally live in different states. They went out to eat, saw movies, and hung out at home together.

“What we saw with Bubba was totally a miracle,” Diane said. “He was given a second chance because he has a purpose.”

Abby and her dad had always been close, but the surgery brought them closer than ever. Abby hardly left her dad’s side when he was in the hospital, and she was always questioning the doctors to better understand the situation. Abby even got a tattoo in her dad’s honor. She has an EKG across her foot with the words “My Miracle.” Abby kept her dad company throughout recovery, ensuring that his needs were met. Her diet even changed to meet the needs of her dad’s. A couple weeks later, the two decided to get tattoos together. They got lyrics from “Tiny Dancer” by Elton John. Abby’s was on her rib cage, and Denny’s was on his back. Denny has been singing that song to Abby since she was little, so it holds special significance to their relationship.

“My dad being alive is a miracle,” Abby said. “I know he is realizing that he got a second chance at life and that he needs to make the best of it.”