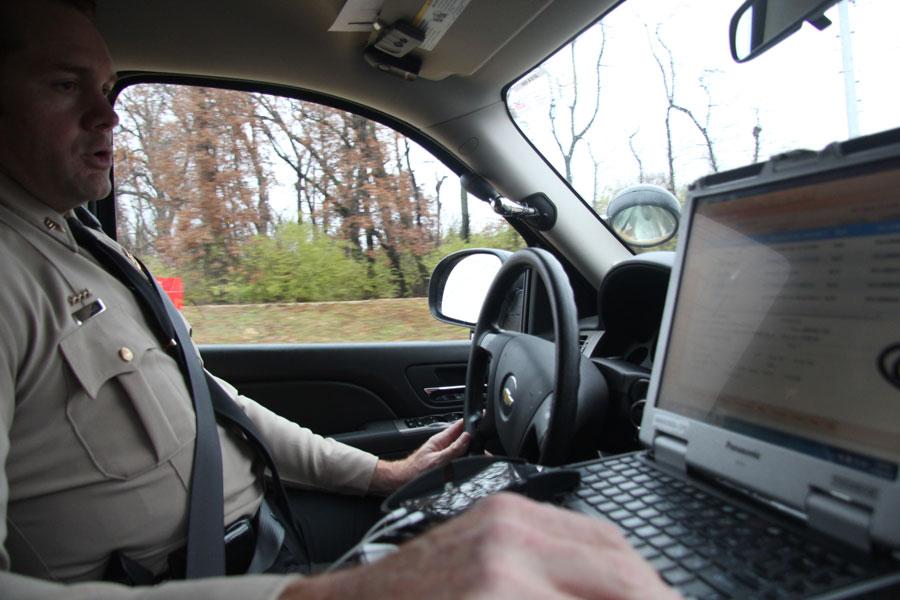 Gallery|10 Photos
Credit to Alyssa Savage
Sgt. Ryan Streck looks at his computer to decide what call he wants to help with for the evening shifts. He creates the schedule and patrols the area. Only a few minutes in and there is a call about a robbery from Toys R US on Mid Rivers. Sgt. Streck decides to help and begins drive along Highway 70. Since the suspected vehicle had Illinois license plates, he heads toward Illinois in hope to catch them. He ends up not finding them so he drives back to town.

Protecting the Community: A Day in the Life of a St. Charles County Police Officer [Photo Story]

It’s not all about catching speeders and eating donuts.

By Chase Meyer and Alyssa Savage

After settling in at his desk, Sgt. Ryan Streck fills out paperwork, answers emails and phone calls as he preps to go into the field. He’s in charge of every officer on duty throughout the shift. Other officers pop their heads into the commander’s office to say “Hi” and get a briefing on the day’s events. It’s a Saturday, so life at the office is slow.

As he heads out to his car, Sgt. Streck checks in the compartment of the back of his Department-issued Chevy Tahoe. Since 1972, the SCCMOPD has allowed officers to take their cars home in an effort to increase their visibility around town, along with decreasing response times in the area. As Streck is showing a “less-lethal” shotgun which shoots bean bags instead of shells, an officer is heard over the radio. A theft has just occurred at the Toys R Us on Mid Rivers Mall Drive, and the suspects with Illinois plates have fled the scene.

“This is what I love about the job,” Streck says as he races toward the area. “You never get bored because there’s always something different.”

Other officers seem to have the situation handled, so the Sergeant continues down Interstate 70, exiting at Highway 370 on his way north to Portage Des Sioux. He talks about the racers the County Police encounter on this stretch of road. Being a straight, level highway for the most part, 370 is a prime spot for drivers looking to put their hot cars to the test. Officers on motorcycles sit atop overpasses, running radar on these drivers while other units wait down a little further to catch them.

“I really did not want to make a 10-point-turn just to try and catch up with that guy,” the Sergeant says as he continues to watch his radar. “You’ve got to assess your situation. How bad of a violation was that driver committing? Are you able to safely turn around to catch up to him? We’re not being lazy. We’re looking out for the safety of ourselves as well.”

One will notice an increase of how cautious drivers become when they realize a police officer is around. Coming to an intersection in Portage, another driver arrives slightly before hand, making an exaggerated stop.

“I guarantee that guy has never stopped at that stop sign before,” Streck laughs as he continues on.

Radio chatter is becoming almost nonstop, and as he’s driving back to town a call comes in from dispatch reporting a harassment complaint. Arriving at the call, the complainant seems to be a regular caller of the Department, referring to multiple officers who are off duty for the night.

“Never met that lady in my life,” Streck said. “But you just have to talk to them. Without doing that, nothing will get done.”

According to the Sergeant, before about 9 p.m., the action is usually slow. Within a period of three hours, the officer reported to one call and made two traffic stops. Throughout the rest of the time, Streck drove around on the lookout for anything that may require his attention.

Returning to the station, Streck opens up the large facility where the SWAT team vehicles are kept. He looks through multiple units that are used for rescuing injured officers, to trucks specialized for taking care of bomb threats.

Police officers aren’t only out to pull civilians over, write them tickets and send them on their way. These law enforcement specialists are involved in every aspect of the community from protecting schools to checking in on the elderly. Next time one speeds by, just think of the amount of work they put in everyday to ensure the safety of the community.