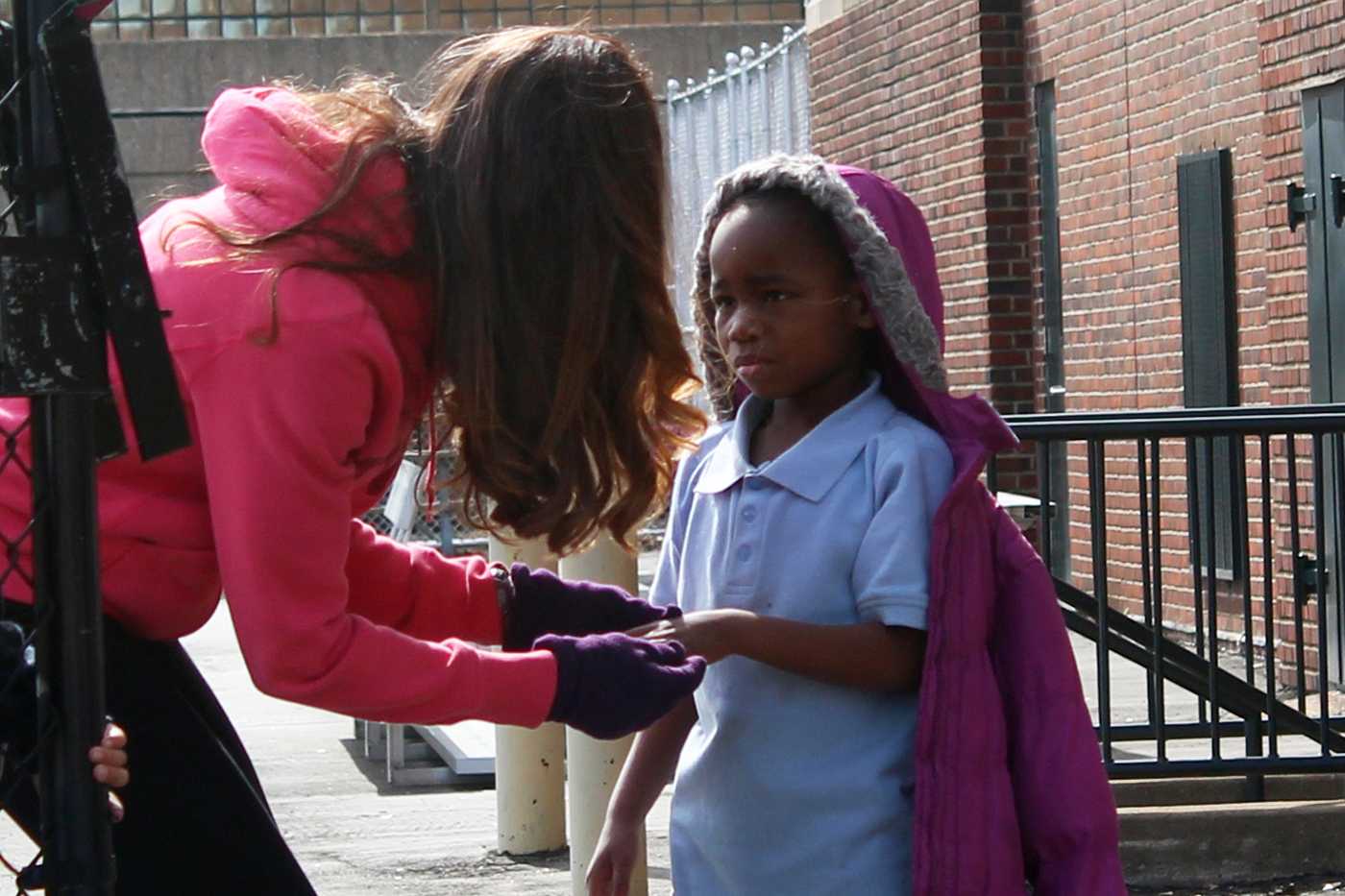 Tenth grader Abdulkadir Hussein strides into the middle and high school building to start his day and is greeted with a smile and a “good morning” from each teacher. A few steps into the hall, he starts to walk under the many different flags of countries that line way above him. As the flags hang proudly from the ceiling, some are reflected down Hussein’s left arm in seven of his many colorful, beaded bracelets, each showcasing a different country’s flag.

With the representation of many countries in his daily wear, Hussein still understands his opportunity for education lies in the country of one bracelet specifically: the United States. Among the other 600-plus students from about 50 different countries in the Nahed Chapman New American Academy located on South Grand, Hussein has a past unique to most in the St. Louis metro area, but common among his classmates.

With a Swahili mother, Somali father, three brothers and two sisters, Hussein is not alone in his transition to living in the United States after leaving Mombasa, Kenya. Their “normal” life on the other side of the Atlantic was stricken with violence. As the fighting arose, Hussein’s family confronted new obstacles from thievery to death. Hussein began to face these horrors first-hand. He was robbed and stabbed, leaving scars that show the injuries he obtained from the violence there.

“Our homes, the thieves would come through the window and take everything, and if you said ‘Don’t take anything,’ they could kill,” Hussein said. “That is why we had trouble. It is horrible and terrible.”

In the Nahed Chapman New American Academy, all teachers and staff understand that the school is full of students from different backgrounds. Backgrounds that can include many students receiving little to no education due to their country being in turmoil or due to the conditions of refugee camps. Either way, because of these circumstances, the teachers all realize they must respect their students’ past experiences. While regarding all their students’ previous struggles, the teachers guide the students to learn what is acceptable in American society and schools.

With the student population speaking more than 25 different languages, the academy is surrounded with the richness of culture. For example, Hussein himself can speak six languages, including Somali, Swahili, Spanish and English. With such a variety of language and cultured atmosphere, students and teachers alike are able to face the exciting and challenging task ahead: preparing for American public school within two years. 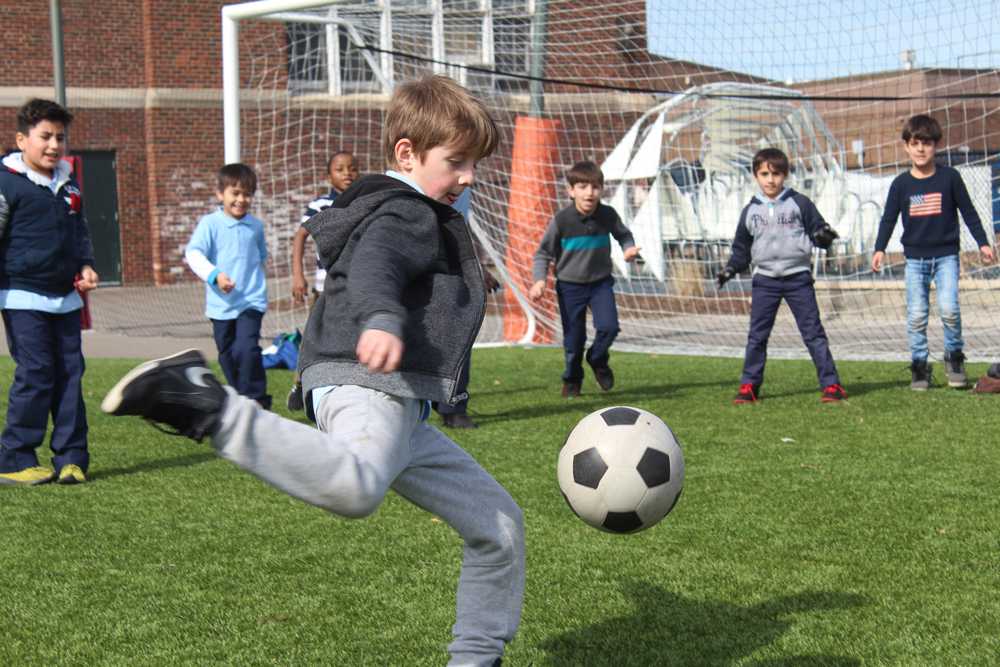 A student plays soccer with his classmates during recess outside of the Nahed Chapman American Academy. The soccer field the students play on was funded by donors to the school in support of a turf field.

As this hope grows and students begin to flourish, new friendships form and a theme of peace, diversity and trust is born.

“Watching those friendships form is fabulous,” high school ESOL teacher Keary Ritchie said. “Where in the world would you have a girl from the streets of Honduras become close friends with a girl from Pakistan? Where does that happen? That’s a really beautiful thing to watch, arm in arm walking down the hall. It’s just about reconciliation. Watching them reconcile what they had going on before and learning to love one another and become friends.”

With students exploring their futures, and teachers working diligently to prepare their students,  the future can be bright for both the students and the society they will have a part in.

“I feel like this school is a good representation of what society could be because you’ve got people here who are overcoming tremendous obstacles and they are being successful and they are getting along with each other,” Moore said. “They are getting along with people who are completely different from them and come from different backgrounds and I feel like that would be a good lesson for everybody out there and that, you know, we can all get along and we can all be successful.” 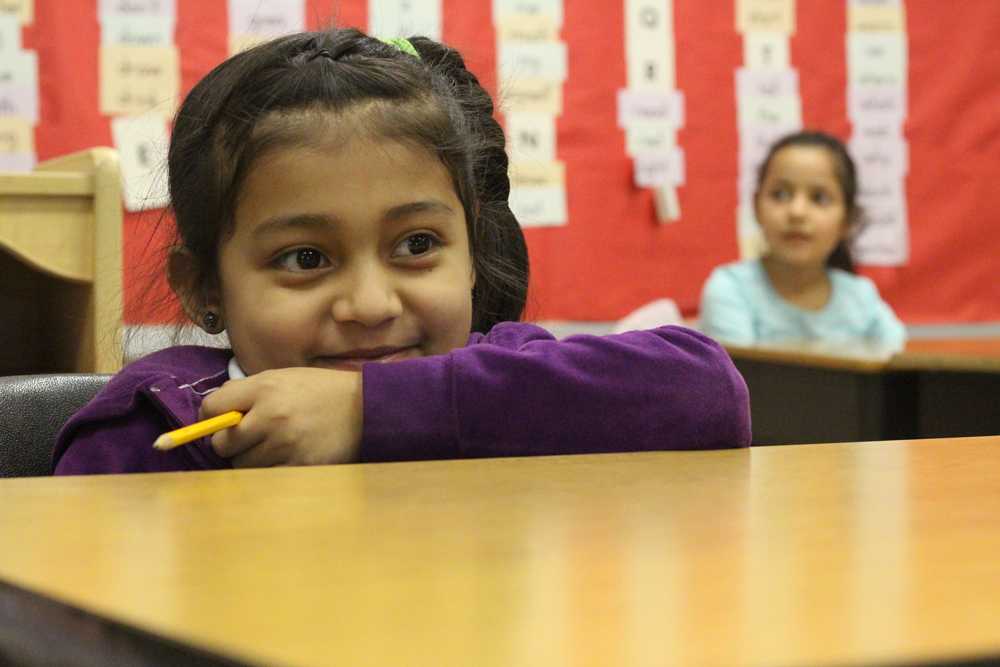 A student smiles as she looks on at the rest of her classmates. Nahed Chapman's enrollment has doubled since the beginning of the school year, leading to a rise in the student to teacher ratio.

“We do field trips and college tours,” high school counselor Danielle Carter said. “We like to do things they will experience at other schools…Coming from there with PTSD and high anxiety and a constant state of shock everyday, they need to know everything up front. We like to give them as much exposure as we can.”

While many students are focusing on just preparing for their next school, or on earning their high school diploma, Hussein sees the opportunity before him as something even greater.

“It helps us to learn more and to get more in the future,” Hussein said. “For me, when I come to school, I need to have a respect and we need to help each other. I help the people, and I like the school and will leave to another school…I need to finish all my school, to go to college, and to get a better future.”

For Hussein, college will be the key to success. After integrating into American schools and society, he plans to return to his country and give back.

“I look to become a police officer,” Hussein said. “I need to know more about the police officers here and what it is like. I need to be better for them, for my country. The school helps. If you become nice to the teachers and to the people, this school helps to be a good person and learn more English and learn more you need to know. I’m not thinking about anything else.” 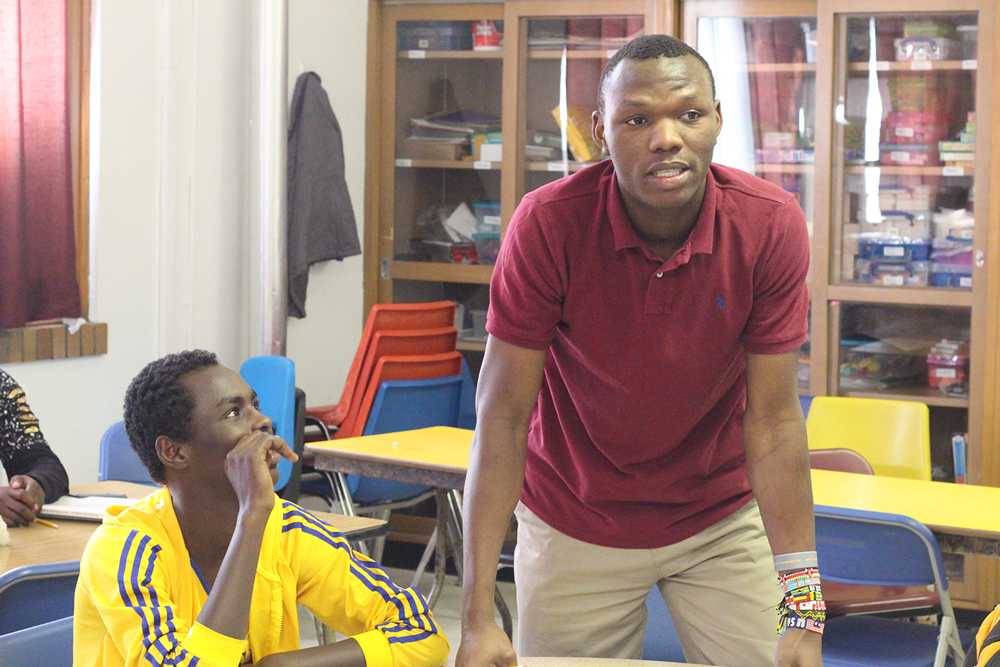 The academy is presented with the task of teaching immigrants, refugees and all ESOL (English for Speakers of Other Languages) students the English language and culture. To do this, many elementary teachers use visuals, speak slowly and pull small groups, among other things. Students must also go through transition lessons to prepare for their next school which includes small tasks, such as opening a lock for a locker or learning to enter lunch numbers into a computer. Many of these daily tasks for American students must be learned by the Nahed Chapman New American Academy students as a lot of the students haven’t worked with numbers before.

Regardless of some students having little schooling, they have the same graduation requirements on top of three English classes and transition lessons. Even with all these classes, students may only stay two years at the academy before having to integrate into American public schools, and with a constant increase in students, the time cannot be extended.

Within these two years, students must undergo a complete transition including learning about proper hygiene, riding busses and making friends.

“Our students are every bit as capable as every other student in this country,” assistant principal Brandon Clay said. “They have all the abilities to succeed. They have the capabilities to do what everyone else in America can do and I think that that is vital that every single person knows that here.” 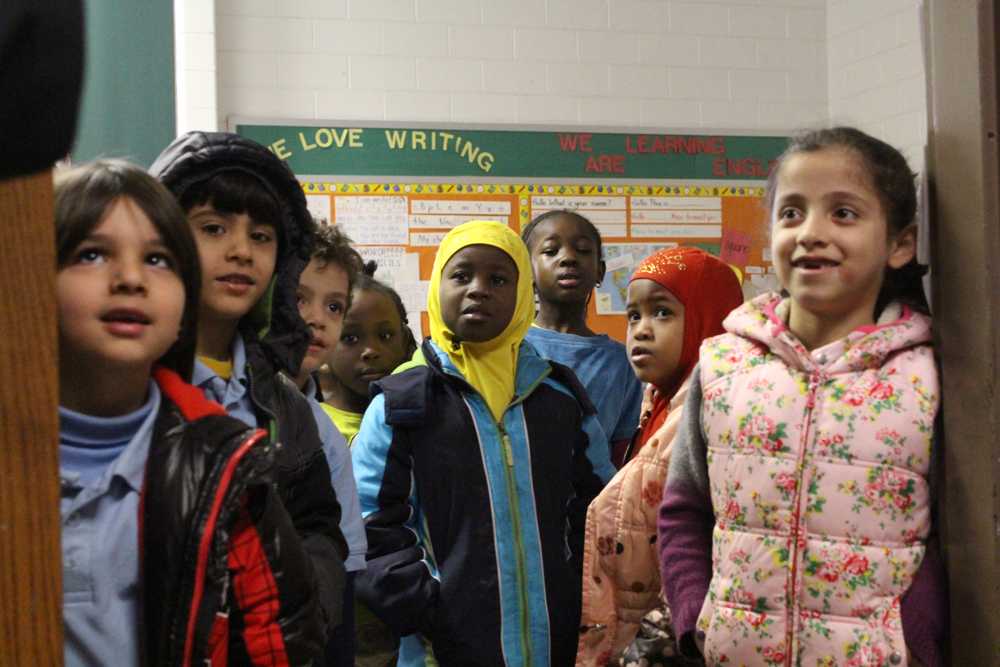 At the beginning of the school year, there were approximately 300 students, including Hussein. When the presidential election neared in November, the school’s enrollment abruptly doubled to 600 students due to concern for policy changes. Because of this, the academy had to quickly adapt.

As more students arrived, some classes had up to 50 students until more teachers could be hired. On top of that, the middle school upper floor had to be renovated to provide more classrooms, and middle school students had to eat breakfast in the auditorium since there was not space for all the students to eat breakfast in the cafeteria. This increased enrollment has also stretched already thin resources even thinner. Many students don’t even have writing utensils and paper, which leaves teachers trying to provide supplies with little to no funding from the district. Yet, even with a lack of staff and little funding, the faculty still stays optimistic and continues to work nonstop for their students. 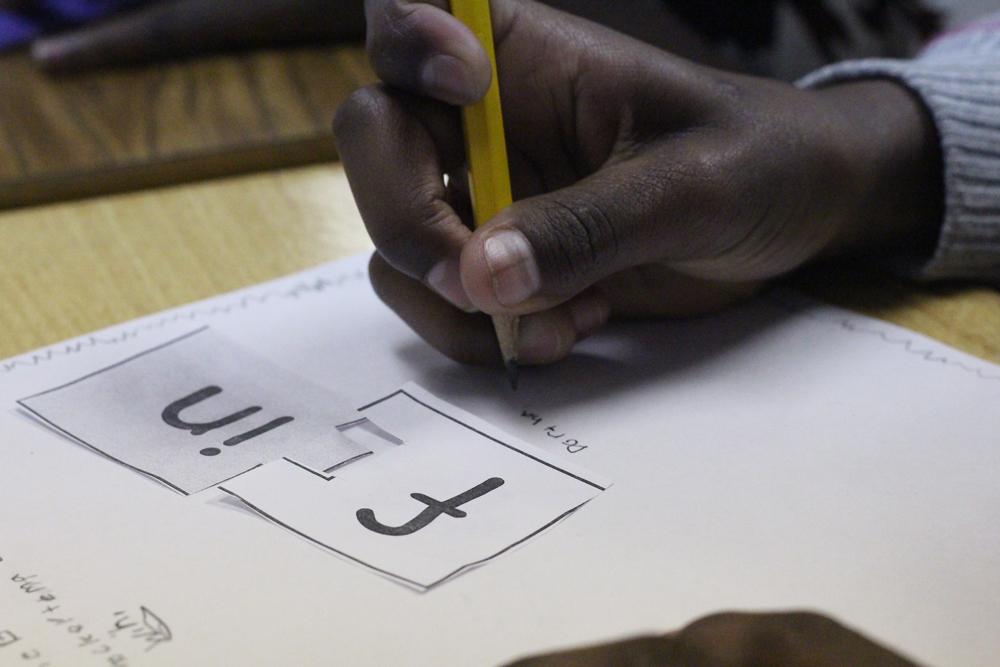 Social workers are made available to help students who have faced trauma and 100 percent of students at the school qualify for free and reduced lunch. With 90 percent of students never having been in school or only having interrupted schooling, the students are facing very different learning experiences in the United States than in their last country. Whether living in a refugee camp and receiving no education, or obtaining only sporadic education, they all have a bit to learn before assimilating into American public schools.

One of the issues to occur was shoving in the lunch line.

“Lunch can get to be a little crazy, especially when kids first start here,” academic instructional coordinator Kelly Moore said. “They tend to fight to get to the front of the line. We learned the reason they do that is because if you’re not first in many of these refugee camps, if they’re not the front of the line, they may not be able to eat. That’s part of the process, trying to get them to a place where they feel comfortable enough to not be at the front of the line.”

While the transition to the U.S. can be a drastic one for many, seemingly small efforts make a big difference for students in helping them get comfortable here.

“They will serve rice and beans every day,” Moore said. “That is such a staple of their diet in the Middle East that they created a special menu for school. We will have pizza and chicken and all the other things the other schools have but we will also have rice and beans, every day. When they come here there is so much change and so much different that it helps. There’s food they eat and are used to it.” 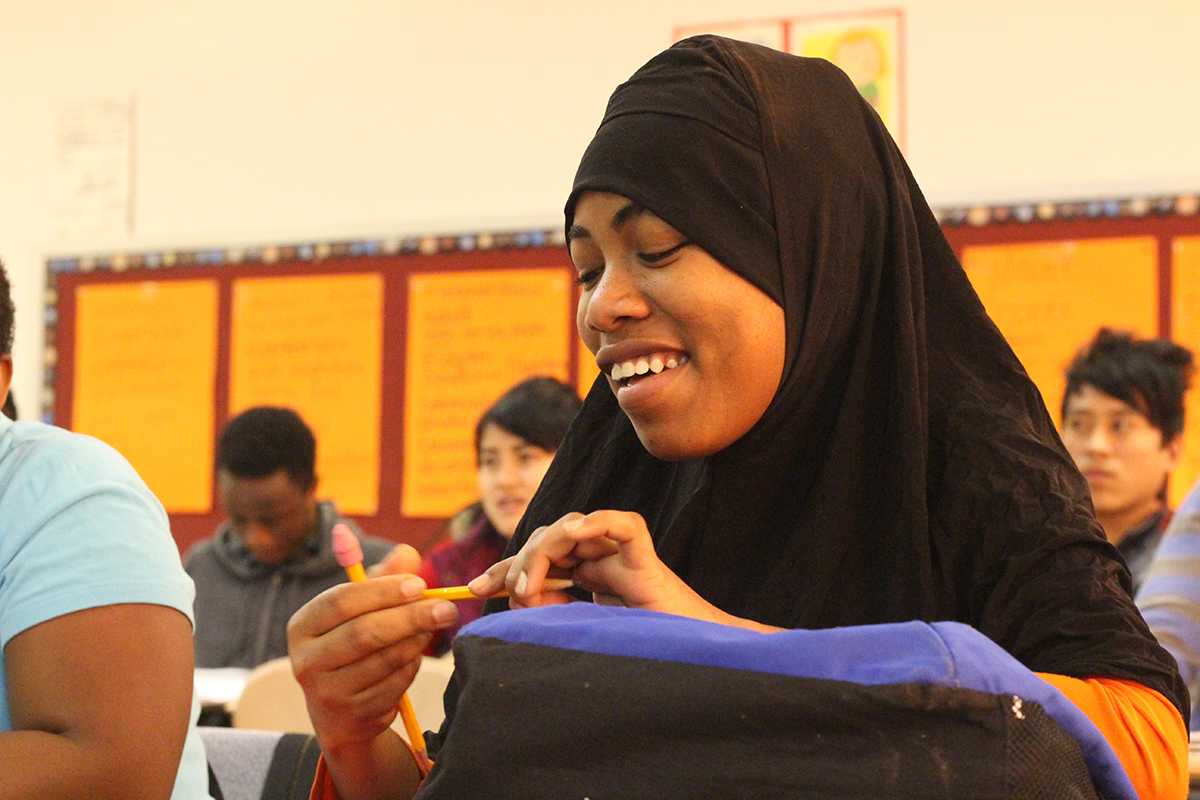 A 9th grade student at the Nahed Chapman Academy smiles after getting an answer correct. Students come into the Nahed Chapman New American Academy at various levels. They get to attend the school for two years, or until they can adapt successfully into American society. Some students have no concept of numbers when they first get to the school, but the staff is able to get the students where they want to be.

Atop of small comforts like food, the school has developed a few programs to help some students adjust and channel any anger from the situations they have come to face, be it their previous country’s struggles or be it the difficulty in learning a new language and culture.

For students who may require a bit of extra guidance, a full bi-lingual staff is available in the office, with people who speak Spanish, Arabic, Swahili, Pahli and French. To help students adapt to their new environment, some extracurricular activities have also been started. For Hussein, the soccer team is a good outlet to play and work hard with his friends. Some of the other activities include a new a basketball program, intramurals and soon-to-be Girl Scouts and Boy Scouts.

Another group beginning is an art therapy group to help students channel their feelings. The art that these students, along with all other students, create displays a message to all. This message of love and hope is grown throughout the students’ artwork, which hangs throughout the hallways of the elementary school.

“The teachers try to incorporate into their reading passages, their writing and their art about diversity and community,” Moore said. “I think it’s a beautiful thing and they come from all different places, but they’re in the same situation: not knowing a lot of English and this new environment and getting them to connect to all the kids that speak their language.”