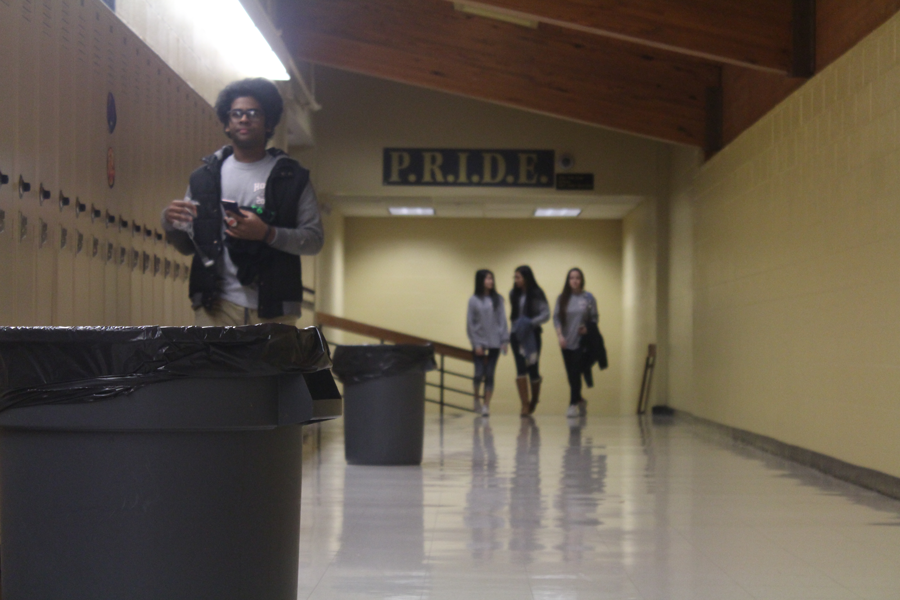 It has made it through six expansions over its 30-plus years, and in that time its students and staff have been confronted with a common problem made worse by its age and its size: leaks. To halt some of the infiltration, the District replaced parts of FHN’s roof in the fall and plans to replace even more of it this summer.

“Francis Howell North is kind of like an old house,” Jeremy Boettler, FHSD director of facilities and operations, said. “It’s got problems, and all you can do is try to fix them, but the problems don’t go away. It’s a very challenging building.”

FHSD addressed water infiltration issues at FHN this fall by replacing parts of the roof over the band hallway, the commons and the weight room. The District also plans to redo about half of the school’s roof this summer as part of an insurance claim. Even with these fixes, however, stopping all the leaks in a building as large and as old as FHN is nearly impossible.

“I think you’re always going to have roofing issues,” Activities Director Mike Janes said. “When you have that much square footage, you’re going to have something going on. We try to fix those problems as soon as possible and repair the issue and also work within the budget.”

Water infiltration at FHN is frequent, but its causes can be complex. In fact, Boettler estimates that at least half of the leaks have nothing to do with holes in the roof. Water drips down HVAC units. It seeps past bricks. It enters through 30-year-old mechanical units on the roof. FHN’s age makes the school even more vulnerable, and its six additions add lots of chinks in its armor, leaving FHN as one of the district’s leakiest schools.

The problem can be even more complicated because water doesn’t always leak straight down. It can take twisted paths that make finding the source of the leaks difficult.

“When you have facilities that are 30 years old, you’re going to have infiltration problems,” Boettler said. “Unfortunately, it’s just the reality for buildings that are getting older.”

FHSD has funnelled about $1.5 million in total capital expenditures into FHN facilities in the last two years, which includes updates to the HVAC system and floor tiles, among other projects. Boettler estimates that in this same time period, water infiltration has been cut in half, but that the District needs substantial amounts of capital to make any lasting, large-scale fixes to the building. Just replacing the HVAC system, for example, would cost about $8 million. In the meantime, leaks persist.

“Francis Howell North has so many opportunities for water infiltration, it’s mind-boggling,” Boettler said. “If we had a solution and we knew where it was leaking, if we could just go up on the roof and put a piece of rubber down and fix it, we would do that. Unfortunately, it doesn’t work that way.”

Without a way to stop all of the leaks permanently, FHN and other schools in the district respond to water infiltration problems as they happen. Administrators put in a work order to the District as soon as they notice a leak. The District then dispatches a representative to inspect the roof, make repairs if possible or else contact a contractor. They follow up the next time it rains. This process can sometimes seem slow, however, because the district has 23 schools and just one individual from the facilities department who inspects all 23 roofs. While they wait, schools put out trash cans or buckets to catch the water and avoid slips. The process likely repeats the next rainy day.

“If there were 10 roof leaks, we could fix all 10 in the next year, but then 10 more could pop up,” Boettler said. “That’s the challenge with roof leaks. There is no end. It just keeps going in circles.”